Back to homepage »
Share:
„Like all NATO members therefore, Croatia is heavily committed to preserving peace and ensuring that we are able to fulfil our core tasks of collective defence, crisis management and co-operative security. NATO cannot ask for more, and looks forward to continuing the great co-operation we enjoy today…” 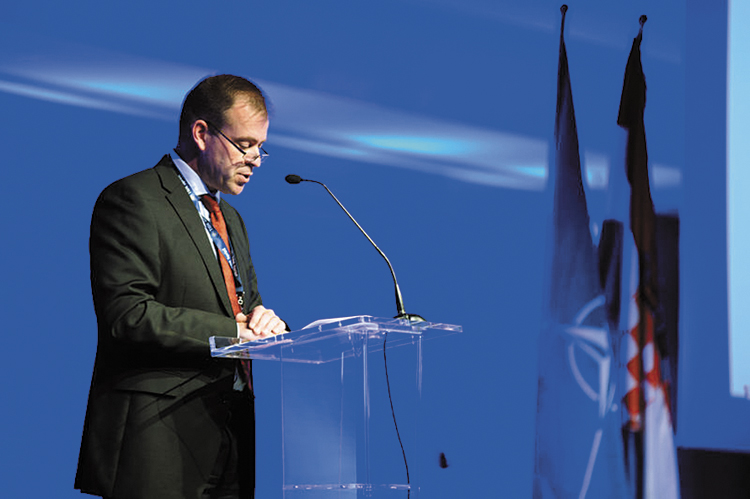 TIDE Sprint, a spring conference organized by NATO Allied Command Transformation (ACT), was held in Split from 25th to 29th March. As many as 400 participants from 30 countries (both NATO members and partner countries) gathered at the ceremony. Guest included state delegations as well as representatives of NATO agencies and commands, academia and global companies specialized for communication and information technologies. ACT’s main representative was the Assistant Chief of Staff Capabilities Rear Admiral René Tas from the Netherlands. For CROMIL, Rear Admiral Tas outlined the contents and the significance of the conference as well as the activities connected to it.

TIDE Sprint has been held twice a year since 2005. It is an expert forum supporting NATO allies and their partners in their efforts to achieve Day Zero interoperability. Rear Admiral Tas, this is the first time that the conference is being held in the Republic of Croatia. Are you pleased with this year’s conference and with Croatia as the host country?

We are very pleased indeed and have received many compliments from our participants about the excellent facilities, great atmosphere and beautiful scenery. We have been fortunate to enjoy excellent co-operation with the Ministry of Defence of the Republic of Croatia, who have recommended Split as the location, supported us throughout the planning of TIDE Sprint and provided us with security. We are also very pleased that the Chief of the General Staff of the Croatian Armed Forces General Mirko Šundov gave the keynote address on the first day of TIDE Sprint.

What other ACT’s activities are connected with TIDE Sprint?

What were the most interesting topics at this year’s conference in Split? Do these topics point to any new trends and needs?

This edition of TIDE Sprint had fifteen topics or, as we like to call them, ‘tracks’. The agenda for each track was designed by experts in that particular field. The experts’ role was to ensure that the work undertaken met the needs of the expert communities and groups that develop our decision support capabilities. Because all topics are equally important, it is difficult to single out any one topic. However, as TIDE Sprint is a forward-looking event, we were able to discuss ideas such as data science and the necessity for NATO to approach some of the issues surrounding human/machine teaming. Communications is another feature of TIDE Sprint and we use this event to explore innovative ways of improving the exchange of critical information among our warfighters, right down to the level of an individual soldier and a platoon.

Is it possible to evaluate how many conclusions from previous ACT conferences have been implemented into the development and transformation of NATO so far?

This is a very difficult question to answer. At TIDE Sprint, we encourage participants to come up with ideas and ponder future technologies and capabilities while recognising that, like at any think-tank event, some ideas may not meet the needs of the warfighter or may be too futuristic to be implemented immediately. However, we have enjoyed some great successes. One of the best examples is Federated Mission Networking (FMN), where we routinely take forward the standards and specifications for ‘day zero interoperability’ that originated in TIDE Sprint. This improves our allied nations’ ability to “plug-and-play” their computer-based systems immediately and exchange vital information from the very beginning of an operation. This may seem straightforward, but it has functioned with great difficulty until now. Thanks to the work done at TIDE Sprint, our ability to make better and faster decisions is improving. 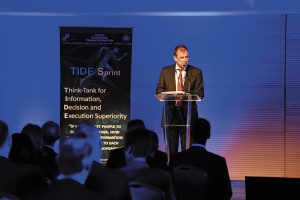 Is the influence of the TIDE Sprint conference felt in NATO’s missions and operations? Does that influence reach NATO’s soldiers on the field?

As TIDE Sprint is a forward-looking event, its outcomes are often seen as a long-term development of capabilities; future autonomous logistic support warehousing is a good example of a project that will be developed for some time before its real operational benefits are felt. However, that does not paint the complete picture. Much of the work undertaken at TIDE Sprint continuously helps improve the interoperability of our computers and their ability to exchange information. We use FMN’s principles and roadmaps for this. For example, many core services we rely on for communication, such as voice chat or text messaging, are frequently reviewed and updated so as to produce real improvements for our warfighters on a yearly basis.

Decisions in NATO are reached by consensus. Does the Alliance manage to reach a consensus when the development of its capabilities is concerned?

The vast majority of capabilities used by NATO belong to the 29 nations that make up the Alliance. NATO is expected to step in and develop additional, common-funded capabilities only when there is a gap between our needs and the allies’ capabilities. Even in such a scenario, all 29 nations need to reach a consensus on what NATO needs to provide and how much it would cost. For instance, a critical capability provided by NATO is the ability to command and control a NATO-led operation. Without this ability, NATO allies and partner nations could not seamlessly operate their capabilities and act as a single coherent force. The continual improvement of command and control is a key feature of TIDE Sprint.

How are necessary capabilities defined and developed? Is there a prescribed procedure for the development of capabilities?

NATO has developed a procedure called the NATO Defence Planning Process (NDPP), which allows us to look at potential threats, agree on the best countermeasure and plan out the necessary capabilities. A part of this procedure is ensuring that the members of the Alliance share the burden of providing necessary capabilities which they cannot attain on their own (e.g. command and control of NATO-led operations) and putting in place a strategy for their development.

What is your impression of the interoperability among the armed forces within the Alliance? Is their operability on the level demanded by modern military doctrines and technologies?

It is important to realise that the interoperability between our allies has as much to do with our personnel and process as with our technical equipment. We have measures which allow us to test and confirm whether nations taking part in NATO missions are up to task and interoperable with one another. I have already mentioned the Interoperability Continuum, which allows us to develop interoperable capabilities. That is not all, however. You will have seen many reports from the recent Trident Juncture exercise, the largest deployment of NATO forces to Europe since the end of the Cold War. If you are looking for evidence that NATO is an interoperable alliance, you need not look any further.

How do you evaluate the co-operation between NATO, specifically ACT, and the civil sector, i.e. academia and industry? How do you envision that co-operation in the future?

It is vital for ACT to co-operate with academia and industry. Without academia teaching us on the “art of the possible” and industry telling us what is available, NATO would struggle to develop the necessary capabilities. This is particularly important for command and control, where science and technology are moving at a breath-taking pace that we would struggle to match on our own. Where possible, we include academia and industry in all aspects of our capability development processes. This includes events such as TIDE Sprint, where we welcome industry and academia to fully participate in every aspect of the event. We also have dedicated groups such as the NATO Industry Forum or the NATO Science and Technology Organisation (STO), where we ask industry and academia to provide us with detailed and focused expertise in very specific areas.

This year, the Republic of Croatia is marking the 10th anniversary of its accession to NATO. As far as ACT is concerned, are there any areas in which Croatia could play a more prominent role?

Croatia is a highly valued member of the NATO family that remains fully committed to the Alliance’s values. Croatia supports a number of NATO missions, such as KFOR. It has been participating in missions in Afghanistan since 2003 and is planning on taking part in the NATO Training Mission Iraq (NTMI). Croatia also takes part in key NATO exercises and has hosted some strategic conferences in Split, such as the NATO Industry Forum and the Military Intelligence Committee. Like all NATO members therefore, Croatia is heavily committed to preserving peace both domestically and internationally as well as ensuring that we are able to fulfil our core tasks of collective defence, crisis management and co-operative security. NATO cannot ask for more and looks forward to continuing the great co-operation we enjoy today.

Was this your first visit to Croatia?

Yes, it was. I managed to tour Split in the evenings and visit Dubrovnik after TIDE Sprint. I had previously heard stories about your beautiful country and I feel grateful to have been able to see it with my own eyes.