Back to homepage »
Share:
"The Homeland Security System is ready for the Firefighting Season 2020, the major operational forces are ready, and all forces will be subordinated to the Operational Firefighter Command at Divulje. 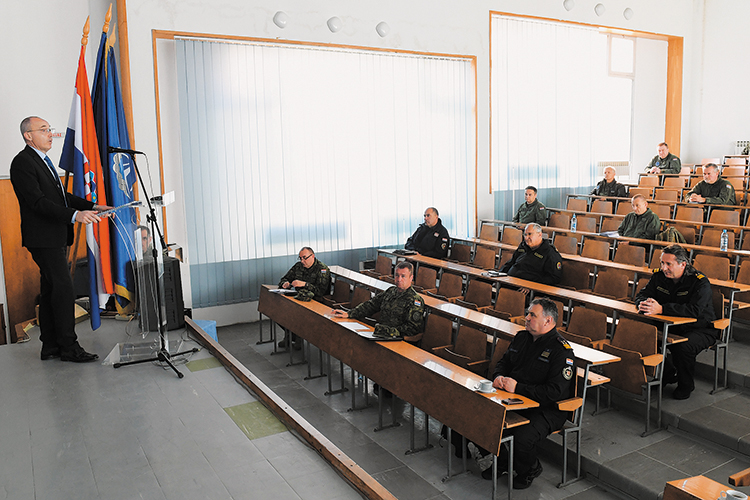 “The Homeland Security System is ready for the Firefighting Season 2020, the major operational forces are ready, and all forces will be subordinated to the Operational Firefighter Command at Divulje. The command proved its competence during the past two years and I believe it will remain so in the Firefighter Season 2020“, said Minister Krstičević.

Minister Krstičević praised the meeting and the status of preparations and preparation plans of all components of the Homeland Security System ahead of the Firefighter Season 2020 and announced the interdepartmental Exercise “Sigurnost 2020“ (Security 2020) “ exercise, to be held in late May.

“The objective of the Exercise is to check all the necessary processes, procedures and techniques that are related to coordinating all operational forces, then the communications and communication systems and all that is needed to get ready for this year’s PP season. The Homeland Security System is ready for the Firefighting Season 2020, the major operational forces are ready, and all forces will be subordinated to the Operational Firefighter Command at Divulje. The command proved its aptness during the past two years and I believe it will remain so in the Firefighter Season 2020.

The Minister stated that fire statistics in this part of the season revealed an increase compared to the past years. The aerial forces extinguished 61 fires this year, almost 50 % more engagement than the same period in the past years. The Minister also stressed that the Croatian Army and Navy forces were preparing for the firefighter season 2020 using and networking new technologies (UAV) in fire prevention.
The Minister concluded by expressing appreciation to the pilots of Canadair aircraft and Air Tractors and to the aerial forces of the Croatian Armed Forces, as well as to the Croatian Firefightning Association and firefighters for their contribution to date. “They are our true heroes“, said the Minister.

“The management of the Firefighter Season 2020 may be aggravated by the COVID-19 pandemic, but it will not affect the Croatian Armed Forces’ and the Homeland Security System components’ successful task completion“, said Admiral Hranj.

Lt. Col. Tomislav Vacenovski, Commander and pilot of the 855th Firefighter Squadron, said the preparations for the firefighter season were running throughout the year, and the firefighter squadron was fully ready for the tasks awaiting in the Season 2020.

The Chief Firefighter Commander Slavko Tucaković said the firefighter system was undergoing a reorganisation was actively responding to any challenges – in addition to firefighting, the firemen were engaged with repairing the damage from the earthquake in Zagreb and providing assistance with the COVID-19 crisis, and that they were supported by unity and co-operation.

In the first phase of this year’s fire season (up to 23 April) 67 requests from the Croatian Firfighter Association for the engagement of the firefighter forces were logged,; the firefighter forces performed 1,131 flights (155 flying hours), dropping 5,953 tons of water, consuming 124,715 l of fuel and transporting one patient. So far in 2020 the firefighter forces had 61 interventions – double the 2019 figures in the same period. The firefighting forces will combine the aerial, the land and the naval components of the Croatian Armed Forces and the Orbiter III UAV system, which had an important role in early detecting of fires in the year 2019.