Back to homepage »
Share:
Interview - Admiral Robert Hranj: ”On marking the Croatian Armed Forces Day I wish to thank all the members for the committed and dedicated service. We will invest into the human resources as they are the pride, the biggest value and potential“ 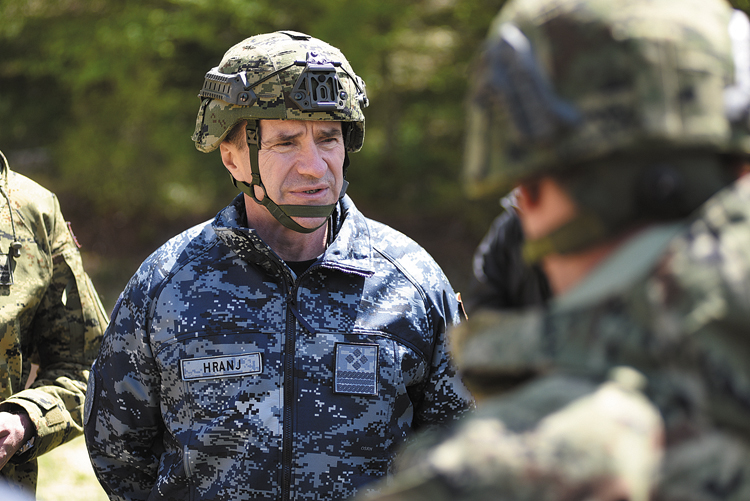 Except during the Homeland War, hardly any chief of the General Staff encountered such a series of such extraordinary and unexpected events and circumstances as did Admiral Hranj shortly after assuming the duty on 1 March 2020. At this critical time Admiral Hranj’s rich experience from the Homeland War and the previous duties in military diplomacy and NATO, in the Croatian Navy and as Director of the General Staff is valuable. In the interview on the occasion of the 29th anniversary of the Croatian Armed Forces for our magazine, Admiral Hranj elaborated on the Croatian Armed Forces’ response to crises and how they affected their future

The Croatian Air Force has suffered another tragic loss. How has it affected the overall system?

We were all deeply saddened by the fatal crash of the ZLIN training aircraft killing two members of the Croatian Air Force.  They left lasting marks in the hearts of their families, friends, colleagues and of the members of the Croatian Armed Forces. Marko and Luka died while performing their duties they loved so much, aware of the risk inherent in pilot profession. I am taking the opportunity to reiterate my condolences to their families and friends.

The life of soldier is tough, complex and full of challenges and risks, and often unpredictable. No matter how extensive the preparations and the awareness of the complexity and of the challenges, it is not always possible to avoid all the inherent risks of a career in the military. This event confirmed it in a tragic way.

We have established commissions to investigate the circumstances of the accident and the training on ZLIN aircraft has been temporarily suspended until systemic or serial errors which could affect flight safety in future use of ZLINs are ruled out. Last but not least, it is our task to take all measures to radically reduce the likelihood of such accidents. We shall address this goal by enhanced training, intensified supervision and inspections and by insisting on unconditional legality of actions and operation and on the upgraded working environment work for all members of the Croatian Armed Forces.

The Croatian Armed Forces Day and the Croatian Army Day will be marked with dignity and pride despite the unusual circumstances imposed by the COVID-19 epidemic restrictions and protective measures. The programme may be more modest than usual but the Homeland war and the fallen Croatian defenders and war invalids will be commemorated with due decorum and the memory of the Homeland War as a symbol of the strength of the Croatian people and of the patriotism of Croatian soldiers preserved.

The Croatian Armed Forces assisted with the epidemic crisis, first by pitching the tents near the Dubrava Clinical Hospital and later by clearing the rubble in the wake of the earthquake that hit Zagreb. How do You evaluate their engagement?

A few minutes after the strong earthquake hitting Zagreb early on Sunday 22 March, the Croatian Armed Forces were put on high alert and 150 members were dispatched to clear the rubble in the centre of the city.

The anti-pandemic measures reduced the number of exercises and training activities for the Croatian Armed Forces. Will this affect their combat readiness? Will these activities intensify and compensated as the measures ease?

Indeed, most exercises, particularly the large international exercises and courses planned for the first half have been cancelled due to the pandemic. Some of them have been postponed for the latter half.

Training for the operation of new systems, the maintenance of key combat capabilities and the training for deployment in international missions have remain unchanged and are conducted as planned, while one more cycle of the Specialist Military Training and of the Voluntary Military Service is planned by the end of 2020.