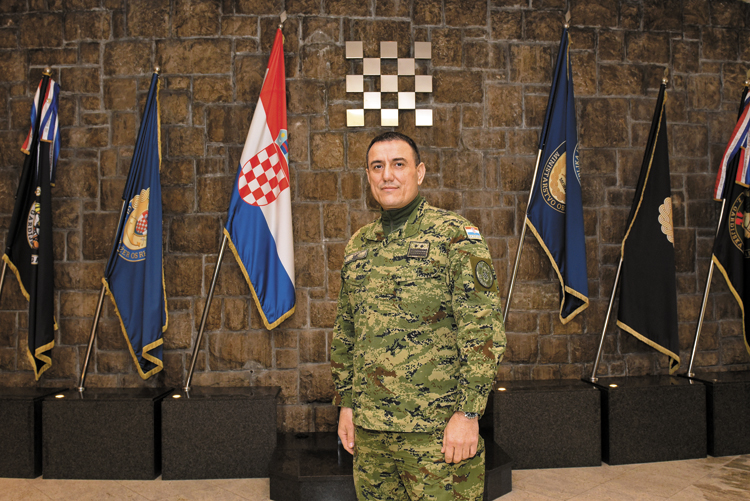 The Croatian Armed Forces are marking the 29th anniversary, and You have recently assumed the duty of commander of the Croatian Army, in unique circumstances . What is the present situation of the service  and what is Your vision of its development?

Marking the Croatian Armed Forces Day we are proudly commemorating 28 May 1991 and the first formal line-up at the FC “Zagreb“ in Kranjčevićeva of the units of the Croatian National Guard, which was the foundation of the guards brigades as well as of other active and reserve units, which managed to liberate the occupied parts of the Republic of Croatia and after four years ended victoriously the Homeland War.

Despite limitations, the Croatian Armed Forces as a pillar of state and society and has to be constantly ready to respond efficiently and rapidly. The time before us is full of challenges, and we shall find the way to address them.

The Croatian Army has three main missions – the defence of sovereignty and integrity of the Republic of Croatia,collective defence of NATO member nations and contribution to the international security through participation in international missions and operations, and an equally important mission of support to civilian institutions and population. The protection of national interests will always be of foremost importance, and will imply continuous development and integration of new capabilities, to keep pace with the evolving changes in the international environment.

My vision of the development of the Croatian Army comprises continued modernisation, development and integration of new capabilities. My emphasis will be on enhanced manoeuvrability, fire, protection and mobility, as guarantors of the defence of sovereignty of the Republic of Croatia.

”The Croatian Army has gained recognisability for the activities conducted i Croatia and abroad. As its Commander I am proud of our engagement in international operations, missions and tasks within UN, NATO and the EU  and will continue to contribute to intenational security. The activities conducted by the Croatian Army indicate the complexity and significance of the military profession”

Our permanent duty is to respond to any challenges faced and continue training and equipping to successfully fulfill the tasks assigned. The construction of military infrastructure will upgrade the living and working conditions of the members of the Army as well as of the accomodation facilities and military asset maintenance facilities.

The first half of 2020 saw a series of events, among which the . latively short time, a lot happened. It underlined the importance of the trainedness and preparedness of the Croatian Armed Forces to assist in  the event of earthquake and the important contribution by the Croatian Army in the rehabilitation of the north tower of the cathedral. How do You  evaluate the tasks and operations performed?

After the earthquake that hit the Zagreb and its surroundings, through the chain of command we received a request for the engagement of the Croatian Army forces in constant readiness to assist the cilian structures. They were in full operational readiness in their bases at 8:00 am bases and started clearing at 0:00 am – 3.5 hours after the earthquake. The forces from the battalions “Tigrovi“, “Gromovi“, “Vukovi“and “Puma“ with the logistic elements, and the forces of the Engineer Regiment and the NBC Defence Battalion of the Croatian Army were dispatched to the centre of Zagreb to clear the roads and pavements and to provide assistance to citizens to enable the normal functioning of the services in the city.

We designated the Engineer Regiment and the Military Intelligence Company of the Guards Armoured Mechanised Brigade, which conducted aerial surveillance with UAV to analyse  the damage inflicted, while the members of the Engineer Regiment drilled micro-holes and filled with explosives and connected the microholes  into a network and performed a controlled explosion, which demolished the junction and separated the north spire between the 72nd and 73rd  storeys.

It was a most demanding operation, as evident from the fact that the removed part of the spire was 13.5 m tall and 30 weighed 30 tons and that the operation was carried out at the altitude of 100 m. Regarding the  earthquake, using our UAV we also mapped the damage done on buildings, balconies and  chimneys  which was not visible from the ground. The engagement proved once again the readiness and capability of the Croatian Army to contribute to the community and assist the people at any time, whenever they turn to it for help.

All members have proved self-sacrifice and as the Commander of the Croatian Army I praise the solidarity and sensitivity for the citizens in need. The engagement of the Croatian Army and of other institutions has been an excellent example of the functioning of the Homeland Security System in a joint and co-ordinated effort of deploying and pooling of capabilities and resources.

The Croatian Army has also selflessly provided assistance to civilian institutions with firefighting, with protection from disastrous floods, assistance and transport of the injured and ill through emergency medical care and in other critical situations. It has proved that the Croatian people and citizens can at any time rely on the selfless help of Croatian soldiers.

We would appreciate your view on the most important plans for equipping and modernisation  of the Croatian Army in the upcoming period?

All implemented and planned projects for equipping and modernisation of the Croatian Army are primarily focussed on development and integration of new capabilities, with the aim of enhancing the manoeuvrability, fire, protection and mobility.

It primarily refers to the initiated projects of equipping and modernisation which have been outlined in the new Long-Term Development Plan of the Croatian Armed Forces – the continuation of the AMV Patrias, the Bradley Fighting Vehicle, equipping with machine guns in NATO calibre, the short-range air defence systems, modernisation of tanks, equipping of artillery units with fire control system, the Common Operational Picture display system, procurement of engineering assets, the ISTAR and NBC equipment  and others.

I would like to stress that even with modernisation, it is motivation, training and preparedness that are crucial to achieve and maintain the readiness of forces, and that is my responsibility, and a responsibility of all commanders in the chain of command in the Croatian Army.