Back to homepage »
Share:
In 2019 the Ministry of Defence has made notable progress towards the shared goal of the Croatian Government and Croatian economy  - businessmen - new and technologically advanced solutions 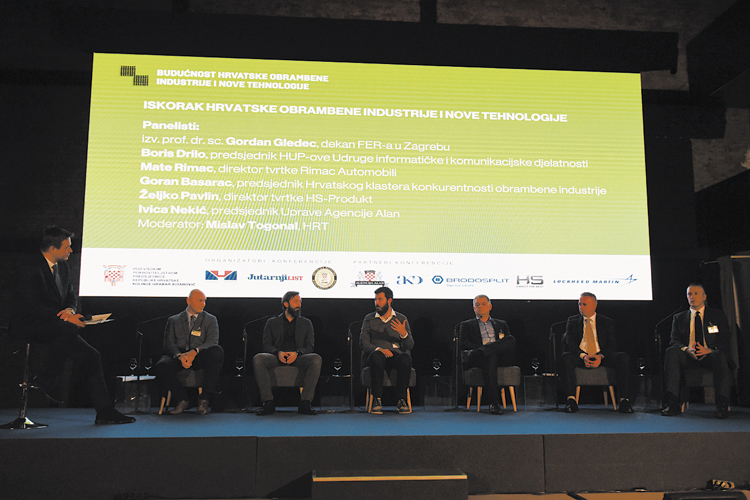 A conference titled “The Future of the Croatian Defence Industry & New Technologies” was  organised by the Ministry of Defence of the Republic of Croatia and the Jutarnji List daily in Zagreb on 27 November 2019, and attended by the Defence Minister Damir Krstičević  and by the Chief of the General Staff of the Croatian Armed Forces General Mirko Šundov, and also by representatives of the leading Croatian defence industry companies and by some of the leading experts and stakeholders of the defence industry of partner countries.

It was also attended by the representatives of the leading Croatian defence manufacturers and by some of the leading experts and stakeholders of the defence industry of partner countries, who also delivered presentations

The Security and Defence Editor at the EU Institute for Security Studies (EUISS) Daniel Fiott delivered a presentation titled “Geopolitics and Technology: How can the EU best respond to the world’s  evolving challenges?”, and the Deputy Director of SIBAT Agency of the Israel Ministry of Defense Paul Friedberg argued the “The size of the country and limited natural resources are not necessarily an obstacle to the development of a strong defence industry”.

The Conference featured display stands of various defence manufacturers and discussions on the situation of the Croatian defence industry, the achievements and paths of development.

The President of the Republic as Supreme Commander of the Croatian Armed Forces in video-streamed message extended appreciation to the Conference organisers for recognising the topics as one of the key topics related to the future development of the Croatian economy.

“I am sure that the Croatian defence industry for the 21st century will sustain Croatia’s security and technological progress and development and towards the growth of the economy.

Minister Krstičević: A strong defence industry guarantees development of the Croatian Armed Forces and their capabilities

Minister Krstičević stated : “A strong Croatian defence industry which keeps pace with technology is a guarantee of a continued  development of the Croatian Armed Forces and of its capabilities for the purpose of security. Croatia has to mind its security and investment into the defence industry. The industry is a Croatian military, economic and political asset of strategic interest. ”

The Minister said that Croatia had highly competitive defence industry born during the Homeland War and underlined some of its top products recognised internationally  – the company Čateks  produces fabrics for the Slovenian Army, the DOK-ING exports its demining machines machinery to South Korea, and Šestan Busch exports helmets to Lithuania.

“Our ambition is to be a key partner in the development of the defence industry, to develop new capabilities and invest into research and development. In 2019 the Ministry of Defence has made notable progress towards the shared goal of the Croatian Government and Croatian economy  – businessmen – new and technologically advanced solutions created in synergy with the Croatian Army and Croatian scientists, entrepreneurs and innovators, all with the aim of fulfilling the tasks of the Croatian Army and the objectives of the National Security Strategy ”, concluded Minister Krstičević.

The Chief of the General Staff of the Croatian Armed Forces General Mirko Šundov delivered a lecture on “New Technologies and Transformation of Defence –  Operations” and its influence on the organisational structures and processes in the armed forces.

New technologies necessitate exploration of new tactics and technologies, and by extension the enhancemwent of physical and mental capacities of soldiers. We have to build awareness and to be prepared at all times for the abuse of the new technologies. We shall need a new way of thinking about threats, consider risk reduction and seize the opportunity. The human resources will retain their critical importance, and make the difference between good and great“, said General Šundov.

Conference panelists – Mate Rimac (Rimac Automobili), Prof. Gordan Gledec (Dean of the Faculty of Electronic Engineering and Computing) and others

The panelists at the Conference “The Future of the Croatian Defence Industry and New Technologies“ were Prof Gordan Gledec, the Dean of the Faculty of Electronic Engineering and Computing, Mate Rimac, the Director of “Rimac Automobili“, the Chairman of the Association of IT and Communications of the Croatian Association of Employers Boris Drilo, the Chairman of the  Croatian Defense Industry Competitiveness Cluster Goran Basarac, the Director of “HS Produkt“ Željko Pavlin and the President of the Managing Board of Agency Alan Ivica Nekić.