Back to homepage »
Share:
Organisation and implementation of the Croatian Presidency in the defence-related activities  is a responsibility of the Defence Policy Directorate of the Ministry of Defence of the Republic of Croatia 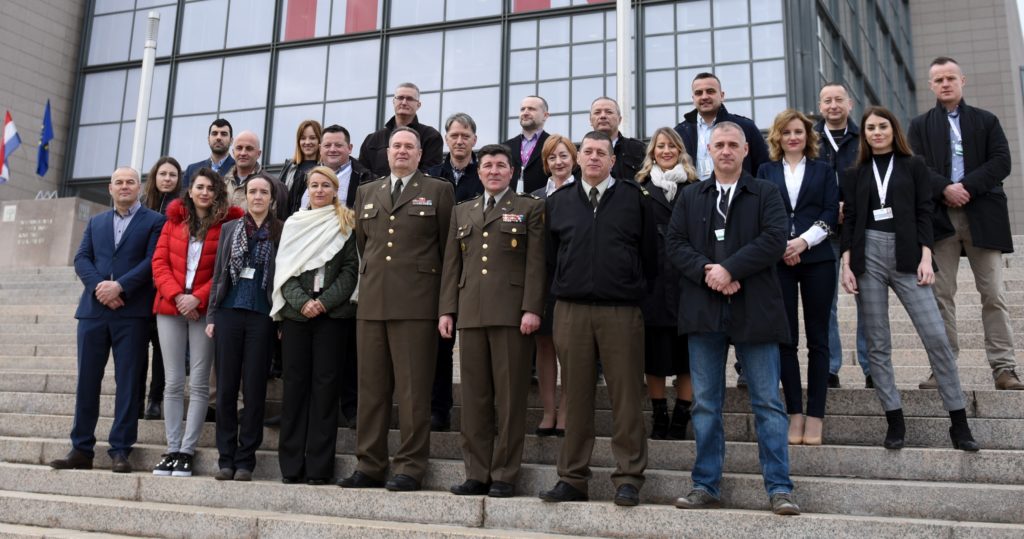 The Ministry of Defence of the Republic of Croatia has established two teams composed of the staff of various units, directorates and services, operating as HR PRES 2020 MORH since 1 September  2019, in charge of organisation of eleven events in the area of responsibility of the Ministry of Defence, during the 6-month Croatian Presidency of the Council of the EU.

Organisation and implementation of the Croatian Presidency in the defence-related activities  is a responsibility of the Defence Policy Directorate of the Ministry of Defence of the Republic of Croatia.

The HRPRES 2020 Politico-Military Team and  the Organisation Team were set up on 1 September 2019, pursuant to the Decision of the Deputy Prime Minister and Defence Minister and to the Order of the Chief of the General Staff of the Croatian Armed Forces.

“Our Team is comprised of ten persons (the staff of the Sector for Support, Services and Quality Control, of the Support Command, of the Defence Policy Directorate, of the Military Police, of the Military Security Agency and of the Protocol Department and we co-work with the colleagues from the Ministry of Defence and of the Croatian Armed Forces as necessary.  The teams have a support of the Dispatch Centre and accomodation for 90 official cars of the HRPRES in the Barracks “1. gardijske brigade Tigrovi – Croatia“ and the support from the Public Affairs Service, in accordance with the Decision of the Steering Council of HR PRES 2020.

“We co-work on a daily basis with the EU2020HR Secretariat established within the Ministry of Foreign and European Affairs as a self-standing sector as well as with the Ministry of the Interior“,  says the Head of the Organising Team.

During the Croatian Presidency the Ministry of Defence and the Croatian Armed Forces will be engaged organising a series of meetings and conferences which are the responsibility of the presiding member state, assisted by  the EU institutions and partners.

The Organising and Politico-Military teams are augmented by the personnel of the Military Police Regiment, of the Support Battalion and of the Service for Support, Transport and Services

All members of the Team have substantial experience with the organisation of large events, such as the Croatia Summit, ASDA , ministerial conferences, conferences of chiefs of defence and the like.

The Team is presently focussed on one of the main defence sector-related events of the Presidency – the Informal Meeting of the EU Defence Ministers, to be held in Zagreb from  4 –  5 March, and the Ministerial Conference on the EU-NATO Co-operation, co-organised with the Ministry of Defence of Germany, to be held in Split in June.

In the words of the Head of the Organising Team, March will be the most intensive period, featuring  the Informal EU Defence Ministers Meeting, two conferences and the Informal Meeting of the EU Military Committee Working Group are planned.

“We tackle the workload with a strong teamwork, and quality planning. The month of March will see four events, including two high-level events. We prepare them in coordination with the EU2020HR Secretariat, with the Permanent Delegation of the Republic of Croatia to the EU and with the Military Representation of the Republic of Croatia to NATO and the EU respectively, as well as with the EU bodies.  It is a unique opportunity for most to take part in the Croatian Presidency of the EU, and we are honoured to be a part of it“,says  Colonel Kovačević.

“HR PRES 2020 is also providing support, in co-operation with the Ministry of the Interior,  to other government administration bodies as necessary.  In accordance with the Decision of the Steering Committee at the Government level, the vehicles engaged in support to the Presidency are kept in the Barracks “’1. gbr Tigrovi – Croatia’. Thanks to the support of the Support Command, a  Dispatching Centre has been established, managing all official vehicles of the Croatian Presidency of the Council of the EU“.

The Croatia-based events sponsored by the Ministry of Defence include a touring of the Croatian defence industry firms.

On 24 March Zagreb will host a high-level conference titled “Unlocking the Potential of European Defence Cooperation: New Opportunities for an Enhanced European Defence Industry“. It is important for the promotion of Croatian firms and defence industry and for presentation of new EU initiatives and funds to procure means that can boost the co-operation of small and mid-sized defence industry means and the economic growth. The benefit of the Conference  is also in connecting the Croatian firms with foreign firms and with the various funds where they can take part“.

The Conference is planned jointly with the European Defence Agency, whose staff visited Croatia in late January to tour the locations and agree on the details of the Conference.

Consultation Forum for Sustainable Energy in the Defence and Security Sector