Back to homepage »
Share:
The Commander of the Croatian defence forces in Vukovar General Major Blago Zadro and the first commander of the Military Police Company in Vukovar Major Alfred Hill died on the same day, 16th October 1991… In a string of hellish days, each one like the other, this day was more hellish than the others and is remembered by the Homeland War veterans… 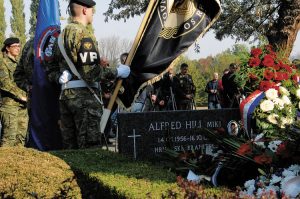 It is October 1991. For the defenders of Vukovar, dates, names of the days of the week and time have long lost their meanings. They have all merged into one uninterrupted, dim string. What is the difference between yesterday, today, the day before yesterday? Or tomorrow? They are all the same. They have been stifled by detonations, shell fragments, losing positions, regaining and losing positions again, lamentations and ever-expanding lists of names of those who are suddenly no more among the living. Then, the Commander of the Croatian defence forces in Vukovar General Major Blago Zadro and the first commander of the Military Police Company in Vukovar Major Alfred Hill die on the same day. Wednesday, 16th October 1991. In a string of hellish days, each one like the other, this day was more hellish than the others and is remembered by the Homeland War veterans.

27 years later. 16th October 2018. A silent, long line of people, flowers and candles on the cemetery in Vukovar. Blago Zadro and Alfred Hill’s fellow fighters and friends, along with their families, military and civilian officials and numerous delegations, have come to pay their respects.

An organisational entity in the Military Police, an educational centre for military police officers, carries the name of Alfred Hill. Its commander, Lieutenant Colonel Mile Skukan was born in Vukovar, participated in the defence of the town and knew Alfred Hill. He recalls 16th March 1991, the day when he joined an active component of the Ministry of the Interior, which at that time was the only organised formation for the defence of the Republic of Croatia against an advancing aggression. It soon became clear that one Military Police platoon in Vukovar would not suffice, so the formation of a Military Police Company commenced. “On Mile Dedaković Jastreb and Branko Borković’s request that Military Police be formed in Vukovar, Alfred Hill was invited to join in, along with other employees of the Ministry of the Interior, because he possessed knowledge about the tasks of the military police. He accepted the duty and became the commander of the Independent Military Police Company in Vukovar in September 1991,” Skukan says. Members of the Military Police took up various tasks in Vukovar, a town surrounded by enemy forces: from classical military police tasks of maintaining discipline and public order, supervising shelters with large numbers of civilians, mobilising civilians and carrying out the mobilisation development of Vukovar’s defence to combat tasks.  They were the defence commander’s intervention forces which won back broken lines of defence when carrying out such a task was necessary. Lieutenant Colonel Mile Skukan, then a young man of 25 years of age, was present wherever he needed to be, wherever he could contribute to the defence of Vukovar. He was wounded on 2nd October 1991, but returned to combat and his position in Dudik with bullet wounds in his right arm after barely two days of treatment. He heard the news of Alfred Hill’s death while he was in Dudik. “It was evening. We were headed to procure additional ammunition. That is when we found out that our Hill had died. Earlier, we had also learnt of Blago Zadro’s passing. How do I describe the atmosphere? A haunting silence came over us. Not much was said. We sat, looked at one another and wondered who was next. There was only sadness. Sadness and few words spoken.”

Retired Lieutenant Colonel of the Croatian Army and one of the commanders of the Military Police in Vukovar Drago Adžaga remembers the defence of Vukovar and the first commander of its Military Police Company Alfred Hill. As an employee of Vukovar Police Administration, he was transferred from the Ministry of the Interior to the Croatian National Guard with the task of settting up the Military Police Company. That was how he met Alfred Hill, whom he remembers as a responsible, professional and brave man with whom he quickly established a good partnership. “We last saw each other on 10th October.  That was the day of the action in Sajmište, the aim of which was to regain and reinforce our positions. He led one Military police group and I led another. He walked one street and I walked another. That was our last meeting. Hill stayed on the position which he had regained and reinforced, while I was asked to return to the Military Police to conduct mobilisation so that we could replace military police officers who were on positions. I was involved in the mobilisation until 16th October. That morning, I found out that enemies had broken the lines of defence in the position held by Hill and we were given the task to reinforce those positions. All morning long, while we were regaining the lost positions, we had no idea that he had died; we only found out later on. That evening, we learnt that Blago Zadro had died, as well,” Lieutenant Colonel Adžaga recalls. After Alfred Hill’s death, he took over the command of Hill’s company until he was wounded in action.

Major Marin Ivanković is an employee of the Ministry of Defence and is currently on lease to the Public Institution “Memorial Centre of the Homeland War Vukovar”. In 1991, he participated in the defence of Vukovar as a member of the Military Police Company under Alfred Hill’s command. Major Ivanković was one of the four men who volunteered to extract Commander Hill when the news of his wounding broke. “I remember in full detail some of the things that occurred on 16th October 1991. I know that we received information about a big enemy attack on the Serbian Orthodox cemetery. Some of our men are in combat; we are in a house opposite an Orthodox church, in Josip Kraš Street. I receive information that our commander has been wounded and that he is in a house on Zelena ulica (Green Street). The four of us volunteer to go there. Of course, we can’t take the road because it is under attack, so we break our way through houses, climb through windows, tear down walls. We come to this building, a huge warehouse, and we find Commander Hill opposite to it. He is sitting. He is leaning. He is next to a well, between the well and a house, as pale as a sheet. Next to him, maybe some three metres away from him, is another man, in shock, pale as a sheet, but alive. We grab the late Commander Hill and try to put him on a stretcher or a blanket; I’m not quite sure what we had with us. Somehow, we load him onto it. Brzi, one of the guys from the medical corps, manages to pass a portion of our path with his vehicle. The four of us carry Commander Hill, but he is already dead. Anyway, we did not want to leave his body to the enemy forces. That position had already been regained; we fought off the attack on the Orthodox cemetery, but lost our commander,” Major Ivanković tells us. For the last four years, he has been fighting his personal Battle for Vukovar and the truth about it by explaining the facts about the defence of Vukovar to the visitors of the Memorial Centre of the Homeland War.

A defender of Vukovar, one of the founders of the Military Police in Vukovar and a retired captain in the Croatian Army Damir Maduna joined the Military Police Company in Vukovar after having previously worked for the Ministry of the Interior. Aside from regular combat tasks and tasks of securing various military installations and headquarters, one of the tasks of the Military Police was to mobilize conscripts. Captain Maduna recalls: “As the Battle for Vukovar progressed, there were fewer conscripts on the battlefield and we were forced to mobilize men. That was the most difficult task for me. It was easier being on the first line of defence because I could find my way around there more easily. That was one of the more ungrateful tasks, but we had to take it up if we wanted to defend Vukovar.” When asked about Commander Alfred Hill, he says: “He was a man who captivated you, whom you trusted. When you heard his voice, you started believing in the impossible.” 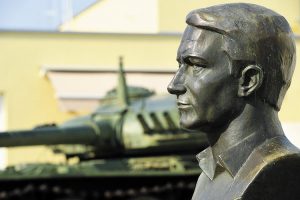 Blago Zadro, the commander of the defence of Borovo naselje, was born in Herzegovina in 1944. He grew up in Vukovar and died defending that town on 16th October 1991.  Posthumously awarded the rank of Major General, Blago Zadro acquired the reputation of a true hero of the Homeland War thanks to the heroism, courage and dedication which he displayed in the toughest days of the aggression on Vukovar. As the Commandeer of the 3rd Battalion of the legendary 204th Vukovar Brigade, he organized the defence of Borovo naselje, although he possessed no prior military knowledge. Thanks to him and his leadership, the armoured forces of the Yugoslav People’s Army were stopped and numerous Serbian tanks and armoured personnel carriers were destroyed. Because of this, the Trpinja road was dubbed a tank cemetery.

The fatal bursts from an enemy machine-gun hit Zadro on the morning of 16th October 1991 in Kupska Street, near the Trpinja road. The news of the charismatic leader’s death was kept a secret for as long as possible so that it would not negatively affect the defenders of Vukovar. Fellow fighters who knew Zadro describe him today as a calm and caring commander and fighter who was always the first one to run into an attack and the last one to retreat. Before leaving on his final mission, he refused to take a bulletproof vest that he had been offered, on the grounds that his soldiers did not have one, either.

Blago Zadro was buried on an old cemetery near the hospital in Vukovar under a codename that only a few people knew. After his body was exhumed, he and his son Robert, who was killed in combat in the Kupres area in 1992, were buried on the Memorial Cemetery of the Victims of the Homeland War in Vukovar, in the Alley of Croatian Defenders.