Back to homepage »
Share:
“Croatian engineers are here, they will take care of that.” These words, spoken by the Commander of Sector West whenever a problem needs to be solved, best describe the contribution of the Croatian forces to UNIFIL and the reputation they enjoy in it… 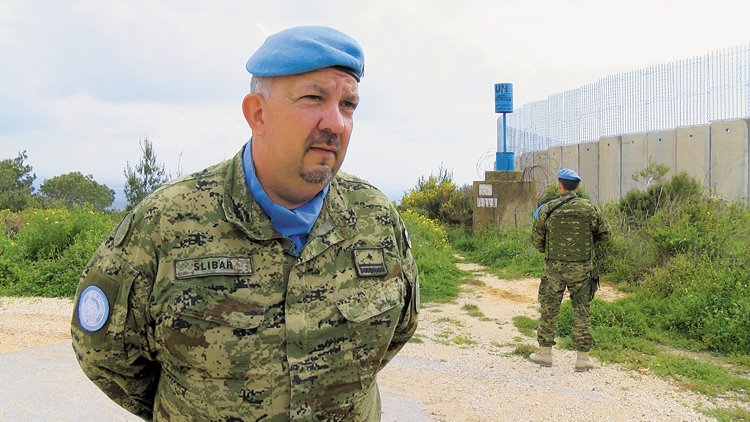 The 2nd Croatian Contingent in peace-keeping mission UNIFIL has been deployed to Lebanon since last October. We paid a visit to the Croatian soldiers, spent time with them on the field and spoke with their Commander, Major Siniša Šlibar, about the tasks that the contingent carries out within its area of responsibility.

What are the main tasks of the 2nd Croatian Contingent in the UN’s peace-keeping mission in Lebanon, specifically in Sector West, where you are deployed to?

The Contingent’s main task is to support the process of increasing the security level in the area of operations. Its members carry out various engineering works (e.g. furbishing and renovating facilities, pillboxes, railings and access roads or removing road barriers) so as to enable the unhindered movement of the UN’s forces in the bases which house them. We primarily carry out engineering works in Sector West, which encompasses roughly two dozen UN bases. When necessary, the Head of Mission and Force Commander Major General Stefano Del Col asks us to carry out engineering works in all UNIFIL bases. The Croatian soldiers’ engagement in CIMIC projects, through which they assist the local community, is also noteworthy.

Who makes up the main force of the Contingent? What formation in UNIFIL are they attached to?

The Contingent is comprised of 52 members of the Croatian Armed Forces. The main force is made up of the Engineer Company of the Croatian Army’s Engineer Regiment. Some members belong to the Guards Armoured Mechanized Brigade and the Guards Motorized Brigade, while the Support Command and the Intelligence Division contribute to the Contingent with one member each. In the area of operations, the Contingent’s main force (43 members of the Engineer Company, including seven members of the EOD/IEDD Team) is attached to the Combat Support Battalion, which is led by the Italian Armed Forces.

Five further members of the Contingent are attached to the Combat Service Support Battalion of Sector West. Also, a Croatian officer performs the duty of an Operational Officer at the Sector West Command, where the Contingent’s Commander works, as well.

One of your tasks is to assist the local community. What projects are you involved with? Has the local population embraced you?

Since the arrival of the Contingent’s main force to the area of operations last November, Croatian soldiers have been engaged in three CIMIC projects. The first project was the reconstruction, expansion and operalization of several kilometres of a macadam road in Yaroun, a village in the Irish Battalion’s area of responsibility. Croatian soldiers are currently installing protective window grills on a secondary school in Chahabiya and should be finished with the project by the end of our deployment. All window grills are constructed in the workshop at the base and later installed on the school building. We are almost finished with our third project, a full renovation of the interior of a scouts’ club house in the village of Rumaysh. The members of this contingent, just like their predecessors, have been embraced by the local community while working on these projects. Just like in countless missions and operations before, Croatian soldiers have demonstrated that they approach each task with professionalism, understanding and sincerity. The locals have recognized that; they favour our soldiers and immediately recognize them by the flag on their sleeves. All of that contributes to the overall image of the Croatian Armed Forces. In general, the UN’s forces in Lebanon have been well received as promoters of peace. The Croatian EOD/IEDD Team also have a very responsible task.

The EOD/IEDD Team execute tasks related to all types of explosive ordnance. They dispose of unexploded ordnances, thus preventing potential incidents and ensuring the safe and unhindered movement of the UN’s forces and the Lebanese Armed Forces. Every day, they inspect the perimeters of the UN’s bases, uncover and mark potential minefields and investigate incidents, in case they occur.

The EOD/IEDD Team are on alert 24/7, meaning that they are ready to react at any given moment within 30 minutes of being summoned.  So far, they have been called to survey a blast site a few times. In their everyday work, they use a robotized remote-controlled system for the reconnaissance, neutralization and destruction of improvised explosive devices. They collaborate with the members of the Italian Armed Forces, whose dogs are employed to detect mines and explosive ordnances.

On the occasion of the International Day for Mine Awareness and Assistance in Mine Action (4th April), we gave educational lectures and demonstrated the perils posed by mines in several local schools. In that way, we not only continued the tradition started by the 1st Croatian Contingent in UNIFIL, but also contributed to the mission as well as to the general safety and welfare of the local population.

What other nations make up the Combat Support Battalion? What is your co-operation with them like?

The main force of the 2nd Croatian Contingent is attached to the Combat Support Battalion. The majority of the Battalion’s members as well as its commanding personnel come from the Italian Armed Forces. Beside them, the Battalion encompasses an Armenian platoon which is in charge of securing the base. The Battalion’s structure includes the Signals Company, the CBRN Defence Platoon and a platoon tasked with the transportation of the Commander of Sector West and the soldiers in the Sector West Command.

You are accommodated in Base Shama. How would you evaluate your stay so far? Are you satisfied with living conditions in the base and the amenities it offers?

The 2nd Croatian Contingent is accommodated in the same base that houses the Sector West Command and the main force of the Italian contingent. It is about seven kilometres away from the Blue Line, the demarcation line between Lebanon and Israel. Since our arrival to the area of operations, the security environment has been stable. Naturally, since this is a crisis area, we must adhere to a number of safety rules, regulations and procedures. However, the UN’s forces, including our contingent, have not been exposed to any greater dangers so far.

As far as food, accommodation and other amenities are concerned, everything is top-notch and we are quite satisfied with all the sports, educational, religious and other contents that the base has to offer.

You have been in this mission since last October and your stay here is coming to an end. How would you evaluate your engagement and contribution?

As our time in this mission draws to a close, I feel honoured to have been given the opportunity to command a Croatian contingent in a UN mission, especially in an international environment as this one. Once again, our soldiers have demonstrated a high level of professionalism in the execution of their tasks. Our engineers have the pleasure of leaving a visible, permanent mark which will be of good use to the consumers of their services. I find this contingent’s participation to have been as successful as that of the previous contingent. Moreover, I believe we shall successfully conclude all on-going projects by the end of our deployment.

“Croatian engineers are here, they will take care of that.” These words, spoken by the Commander of Sector West whenever a problem needs to be solved, best describe the contribution of the Croatian forces to UNIFIL and the reputation they enjoy in it.