Back to homepage »
Share:
A gun salute marked the arrival of the 43-strong inaugural class of trainees at the Marko Babić Leadership Development Centre to Knin Fortress, the final destination of their 88-kilometre march from Udbina. The march was the final test of fitness and mental readiness following six weeks of training. CROMIL’s journalists and film crew followed the march – nobody quit and motivation was abundant, with each step imbued with pride… 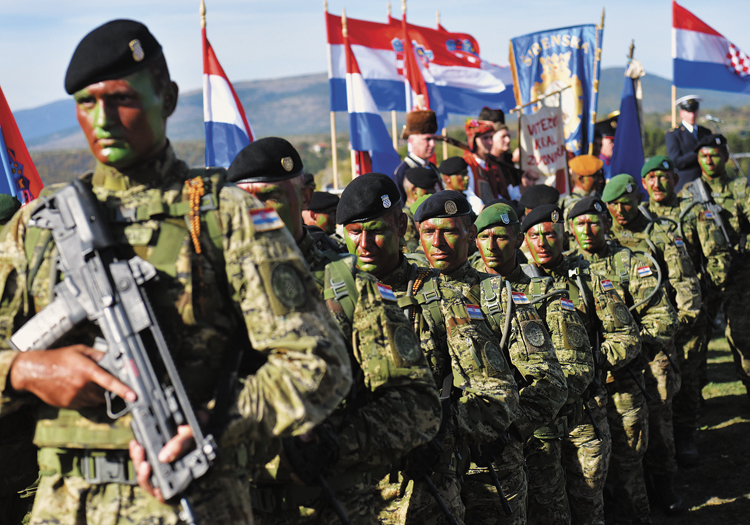 Josip Jović Barracks in the hill town of Udbina is plunged in darkness. It is 4:30 a.m. There is a commotion in front of a mural depicting Marko Babić, a hero of Croatia’s Homeland War of Independence (1991 – 95), underneath which the distinctive motto Sweat spares blood can be read. Equipment, backpacks, weapons, etc. are being checked one final time. Every single one of 43 soldiers participating in the weeks-long training at the Marko Babić Leadership Development Centre is preoccupied by their own thoughts. The most difficult part is behind them, but the crown of the training still lies ahead – an 88-kilometre march from Udbina to Knin, a town in Dalmatian hinterland that stands as the symbol of victory in the Homeland War. The march is the final test of the trainees’ fitness and mental readiness, the finishing touch to the strenuous training they have successfully overcome. Their bodies and spirits have held out till the end. No trainee doubts that they will overcome that final challenge. The centre’s staff, instructors who led them through the six-week training, are by their sides. The instructors once went through a similar training in the village of Šepurine on the island of Prvić. In fact, the training at the Marko Babić Leadership Development Centre is based on that training.

Lt. Col. Tomislav Kasumović, the centre’s commander, gives out final instructions and issues an order to get moving. For one short moment before departing the barracks, everyone gathers under a multipurpose tower with the discreetly illuminated words Sweat spares blood, the centre’s slogan. “Every step on this journey will be imbued with pride because we are marching for our heroes. We have started this journey together and we shall succeed together; quitting and pain are not an option… Do I make myself clear?” echoes the commander’s voice in the night. “Yes, sir!” breaks out the trainee’s reply with even greater intensity. Then, a shout thunders across the Udbina Field: “Sweat spares blood!”

There is not one minute’s delay. At 5 a.m., a file of men departs the premises of the barracks. “We are confident. This is a big moment and a great honour for us. We all have the same goal – to arrive at Knin Fortress as a team. We are proud to have reached the crown of our training – the march – and to have a chance to show all of Croatia who we are and what we are made of,” says trainee SSgt. Marijan Gregurević while departing the barracks.

The soldiers stop at the Shrine of Croatian Martyrs in Udbina, where they receive a blessing and recite a prayer for all soldiers who have died for Croatia’s freedom. They put rosaries, a symbol of Croatian warriors’ faith and power in the Homeland War, on their uniforms so that they might find strength in them on the journey they have undertaken and never forget the values that must adorn Croatian soldiers – gallantry, honour and whole-hearted service to the homeland. 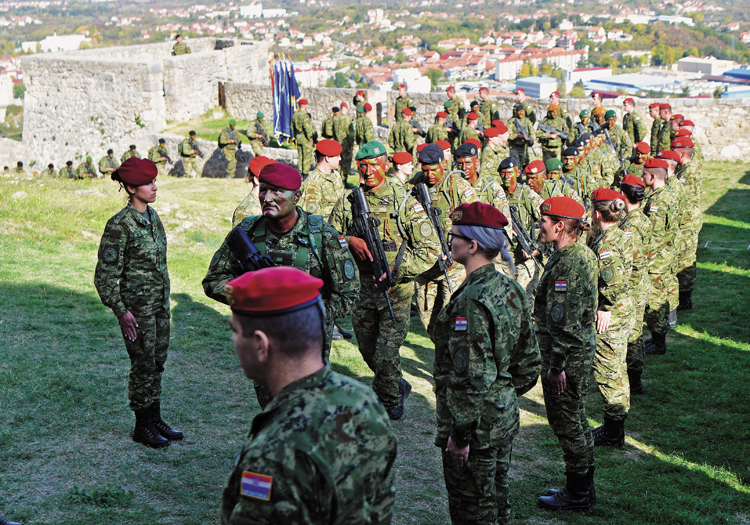 We Are So Motivated That We Are Flying High

The march is divided into nine ten-kilometre legs and the soldiers will have to pass about fifty kilometres before finally getting some sleep. On the first day, they will walk five legs from Udbina to the village of Otrić and then finish off the journey with four legs to Knin on the second day.

CROMIL’s journalists and film crew follow the march, walking some laps with the soldiers. During a short break at Gračac, one third (35 kilometres) into the march, we want to hear how the soldiers are feeling. “We are so motivated that we have been flying high for the last six weeks. We are flying high today, on this march. We have been training for this and we are extremely proud, confident and ready,” says Cpl. Ivan Jure Radanović.

Two more legs remain before the soldiers can call it a day. We meet them on a summit of Mount Velebit called Malovan. The winding climb does not slow them down. Their legs are heavy, blisters hurt them mercilessly, but songs do not leave their lips. As they pass us, famed patriotic rock song Mojoj lijepoj (To My Beautiful Country) makes the place reverberate: “If I could look at her, then I would be looking at sunshine / I would possess a beauty if she were lying by my side / I have always known that I would dedicate my life to her / To my beautiful country I’d serve…”

We meet the file again at the 55-kilometre mark, the end of Leg Five. The soldiers rest for the night in a camp in Otrić, where they are welcomed with applause. They are more than halfway to their destination. They have to stretch their tired, tense muscles, take off their heavy boots and treat blisters on their feet. They only get several hours of rest before the march is continued at 4 a.m. CROMIL’s team waits for the day to break and follows the file on the last two legs of their journey. Ten kilometres outside Knin, the soldiers take a short break at the abandoned Stara Straža Barracks and prepare for the ceremony at which they will receive badges and graduation certificates. They apply camouflage cream on their arms and faces, straighten their uniforms and put on the berets of the guards brigades they belong to.

Entering and passing through Knin evokes special emotions in the soldiers. They are tired, but their spirits are not weakened. The march rounding off their training symbolizes the Homeland War veterans’ difficult path to victory. The men in the file will continue writing a new chapter in the development and training of the Croatian Armed Forces; they will follow in the footstep of their predecessors and be leaders who will lead by example. 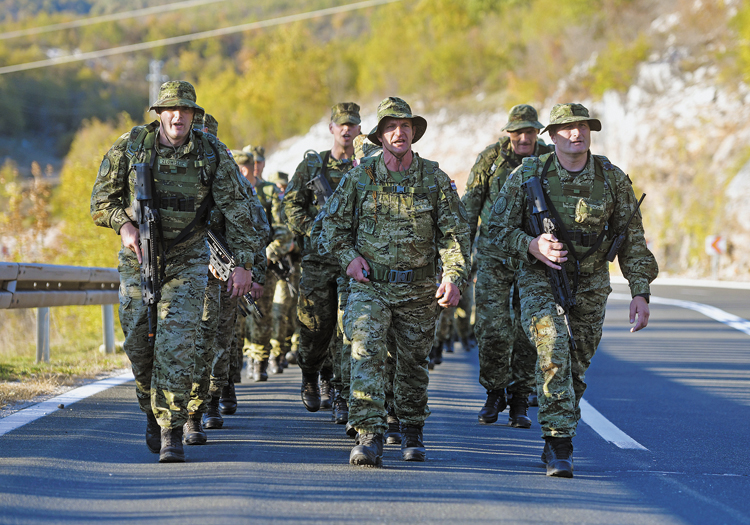 “The end of this course marks the beginning of a new chapter in the training of the Croatian Armed Forces. It is a guarantee of a great future and the good direction in which the development of the modern Croatian Armed Forces is headed,” underlines Minister Krstičević. “You have demonstrated that you possess exceptional skills and the character of a leader, which has always adorned the Croatian soldier. The future of the Croatian Armed Forces is in the hands of the most courageous individuals,” states Krstičević, while Gen. Šundov tells the soldiers: “May heroes of the Homeland War like Marko Babić and others serve as role models and inspiration as you overcome challenges and attain your goals, so that you may become leaders whom enlisted personnel will follow and whom commanding officers will perceive as valuable members of their units.”

“What does not kill you will leave scars,” Lieutenant Colonel Kasumović said at the very beginning of the march. Ultimately, everyone agrees on one thing – those scars strengthen the body and the spirit of true soldiers and military leaders, those who know that the future belongs to the most courageous individuals. In that spirit, they shall continue to lead their subordinates upon their return to their parent units, because they know that “sweat spares blood” and that an individual is the most valuable possession of the Croatian Armed Forces – an army of victors.

The training is intended for NCOs acting as team leaders, squad leaders, platoon sergeants and first sergeants as well as officers appointed as platoon leaders. At one of the most exacting training courses in the Croatian Armed Forces, emphasis is placed on developing skills and knowledge which will be implemented in the trainees’ parent units with the aim of establishing successful and efficient leadership.

The inaugural class at the Leadership Development Centre went through a very taxing training course. So as to stick out till the bitter end, every individual had to be motivated and focused to a maximum degree. From the very beginning, they knew the training was not for the faint-hearted. Out of 60 soldiers who entered the training, only 43 toughest soldiers made it to the final week. The pace of the training left no room for rest. Their mental and physical endurance had to be on a high level. Their ability to act and make decisions was tested under difficult circumstances. The six-week training combined combat skills, leadership elements and mental and physical endurance – three qualities a true leader has to possess. Only a highly motivated, trained and competent leader can pass on the knowledge and skills attained at the training onto their subordinates and thus serve as an example. 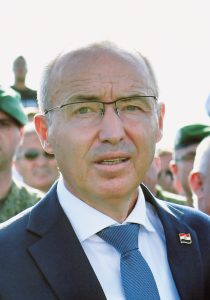 I am happy to be at Knin Fortress, a symbol of victory, and to witness the Croatian Armed Forces be enriched with 43 new leaders. It has not been an easy journey. I wish to extend my congratulations to the centre’s commander, its instructors and all the trainees. The future belongs to the courageous ones. A leader must understand their subordinates and lead by example. An individual is a key ingredient in the development of a strong military. That was the case in the Homeland War and that is the case today. An army is invincible if it is led by motivated and capable officers, NCOs and enlisted soldiers. The Croatian Armed Forces are and will always be a victorious military. Each new class of trainees at the centre will make it stronger and more powerful. 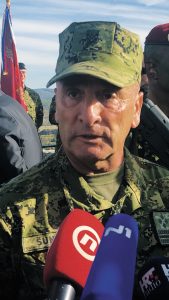 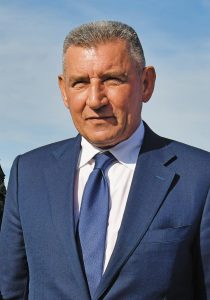 Through this training, the Croatian Armed Forces, the most important component of the Homeland Security System, have acquired highly-trained leaders whose knowledge is a guarantee of the Croatian military’s readiness and capabilities. An individual soldier’s readiness must be in the centre of a military’s development. Throughout history, a soldier, their military skills and their mental and physical readiness have always mattered. I congratulate every single one of these young men and wish them much success in the missions that will come their way. In a way, this training has awakened a part of our history that we are proud of. We are developing leaders who possess the same character traits and qualities that leaders in the Homeland War possessed. I do not think these men fully comprehend the significance of all of this. They will come to comprehend it once they return to their parent units and start passing on their newly-acquired knowledge. They were excellent before the training, but now they are exceptional. 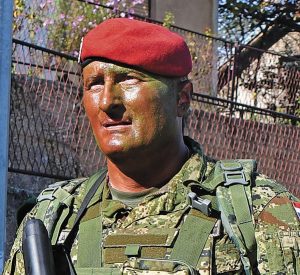 The Croatian people and its military can and must expect a lot from future leaders. This marks the beginning of a new chapter in the training of the Croatian Armed Forces and the development of new capabilities. We are sharpening the blade of the NCO Support Channel – NCOs on lower tactical levels who will lead soldiers in combat, if necessary. The inaugural class will certainly leave a memorable mark on the training of the Croatian Armed Forces. 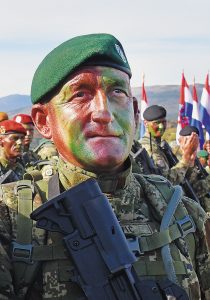 The march was dedicated to fallen combatants and disabled veterans of the Homeland War, which made me feel proud and honoured. I had never dreamt that I would experience something like this. The training was an excellent experience and met the needs of Croatian soldiers. I am satisfied with my results and I look forward to the opportunity to apply my newly-acquired knowledge.