Back to homepage »
Share:
Lieutenant Junior Grade Ante Jović, a member of the Special Forces Command, is the winner of the “Memorial Major Davor Jovic - First for Croatia 2018" held in the Vukovar-Srijem County 7 - 12 May 2018 and the fittest member of the CAF 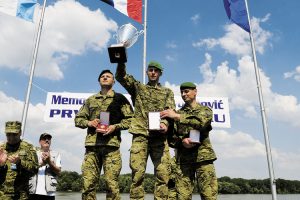 Lieutenant Junior Grade Ante Jović, a member of the Special Forces Command, is the winner of the “Memorial Major Davor Jović – First for Croatia 2018″ held in the Vukovar-Srijem County 7 – 12 May 2018 and the fittest member of the Croatian Armed Forces. This was Lt Junior Grade Jović’s second victory – he also won the 2016 Competition winner too. “It was harder winning the first time but this victory is important for its symbolic value of the battle and defence of Vukovar, and also for the pride over winning a competition named after the war hero Major Davor Jović“. Along with the family of Major Davor Jović, the Competition was attended by the delegations of the Ministry of Defence and of the General Staff of the Croatian Armed Forces, headed by the Chief of the General Staff, General  Mirko Šundov and  the State Secretary for Defence  Tomislav Ivić , by the delegation of the Ministry of the Interior, the Ministry of Homeland War Veterans, by the Mayor of Vukovar Ivan Penava, the Mayor of Ilok Marina Budimir, many visitors, representatives of veterans’ associations and local residents of the Vukovar-Srijem County. The winner’s cup and the medals to the winners were presented by late Major Jović’s sons  Jure and Ante and by the State Secretary for Defence Tomislav Ivić and General Šundov; the statue “Vukovarsko svjetlo slobode” was presented to the winner by the Mayor of Vukovar Ivan Penava. 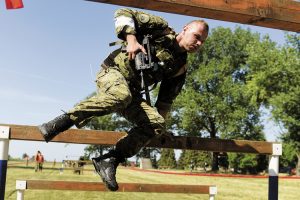 Welcoming the visitors and congratulating the winners on their enthousiastic struggle and persistence  General Šundov also commended the  participation of representatives of the Ministry of the Interior and of the armed forces of nine partner nations.  State Secretary for Defence Ivić congratulated the winners and praised the competition being won by the fittest members of the Croatian Armed Forces. “You have every right to feel proud of yourselves, you set an example to all the members of the Armed Forces and  of the Ministry of the Interior“. The competitors set off at 7 a.m. from Retkovci, yomped (with 16.6-kg  along  the 40-km obstacle course to the Crosss at Danube in Vukovar which comprised 12 workposts,. The course partly led through the “Corn Path“- the sole communication for Vukovar with the rest of Croatia during the siege  in the summer and autumn 1991. The Corn Path is a part of the collective memory of the victims and of many individual tragic stories and therefore a symbolic and important section of the 2018 Competition. The 2018 Memorial gathered 150 competitors – 98 members of the Croatian Armed Forces; 20 members of the Ministry of the Interior and 32 members of the Allied and partner armed forces (Albania, Bosnia i Herzegovina, France, Italy, Kosovo, Lithuania, Macedonia, Slovenia, the United States – the Minnesota National Guard). 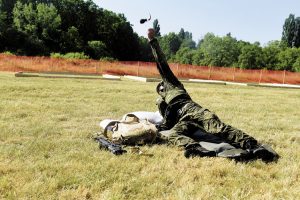 The 2018 competition is the seventh one organised according to with the curent concept. The first competition was held in Knin in 1997″, and was won by Major Davor Jović, in whose remembrance it was subsequently named (the “Memorial Competition Major Davor Jović – First for Croatia“). The main authority was the Croatian Army, and the Executive Officer was Brigadier General Denis Tretinjak, the Commander of the Guards Armoured Mechanised Brigade. The main co-ordinator was the Croatian Armed Forces SMA Mario Mateljić, and the competition coordinator was CMA Dražen Horvat, the Guards Armoured Mechanised Brigade’s  Command Sergeant Major. The Compeition comprised 12 workposts – 5-km orienteering, hand grenade throwing,  military obstacle, crossing a water obstacle, the firing with the HS-9, firing with AT-4 MILES, logistic supply, breaching a mined obstacle   crossing a water obstacle by using the Tyrolean traverse, the crossing of a contaminated area, evacuation of the wounded and placing the MEDEVAC request. 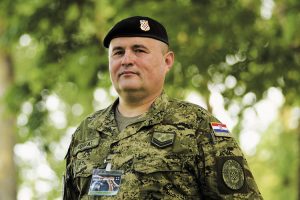 The role and importance of the NCO Support Channel in the organisation of the event  SMA Dražen Horvat, Guards Armoured Mechanised Brigade Command Sergeant

The event of the kind is of high importance for the NCO  Support Channel, which is in charge of the larger portion of the Competition, setting up and managing 12 workposts and eight control posts   and the start and finish arrangements.  We prepared for the demanding task since February, designing interesting workposts and finding the compatible spots in the field and I think that we’ve succeeded and that the Competition will be a pride of the NCO Support Channel.

This is my second winning: maybe this time I am a bit less excited.  I am closely attached to the Competition and to the story related to the defence of Vukovar, which was illustrated by some workposts; I feel happy and proud for that and for winning the  Competition honouring the Homeland hero Davor Jović;

I crossed the course is five hours. The hardest workpost was the logistic supply – most likely the hardest one in 1991.

The hardest workpost was shooting with the pistol. I have taken part in several best soldier competitions, ranking second or third. I am glad with the third ranking this year as well, considering the lack of time to prepare.