Back to homepage »
Share:
The main training event of the Croatian Armed Forces in 2020 – the military exercise “Spremnost 20“ (Readiness 20) was conducted in three training grounds 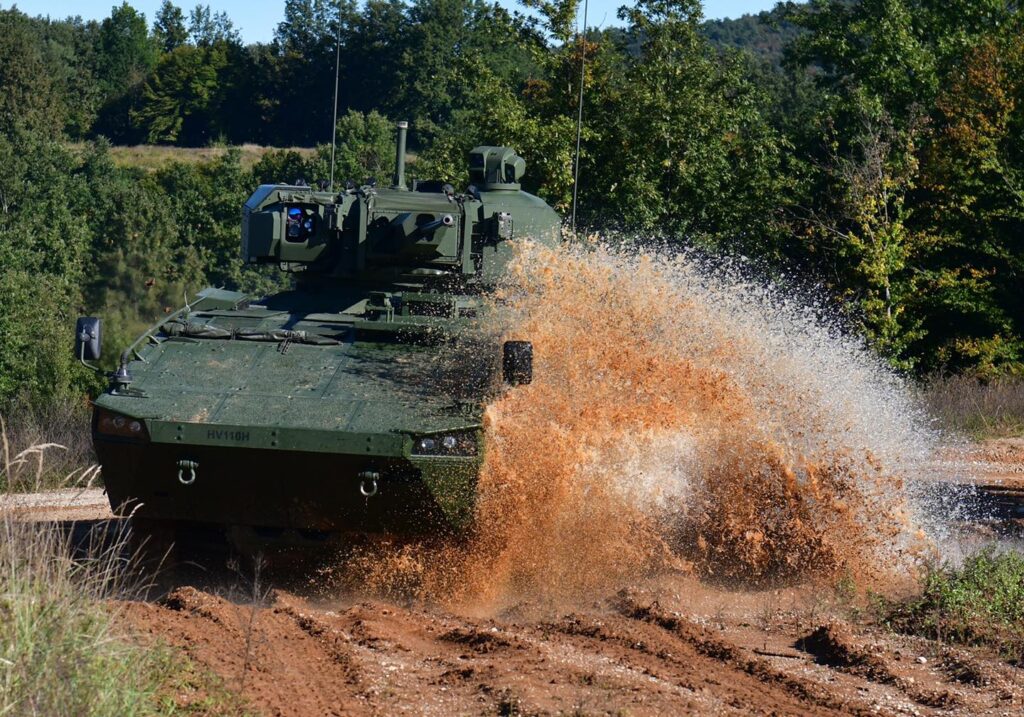 The main training event of the Croatian Armed Forces in 2020 – the military exercise “Spremnost 20“ (Readiness 20) was conducted in three training grounds  – Training Range “Josip Markić” near Knin, Training Range “33rd Engineer Brigade” at Cerovac near Karlovac and the Training Range “Eugen Kvaternik” near Slunj from 23 Sept. 23 – 2 October 2020. The Exercise featured a display of firing power of the new Patria CRO 30L AMV in the Training Range “Eugen Kvaternik”. The capabilities and the integration with mechanised infantry were presented by the members of the 1st Mechanised Battalion “Tigrovi“ and of the 2nd Motorised Battalion “Gromovi“ which are equipped with the Patria vehicles.

The “Hrvatski vojnik“ Magazine team  attended the rehearsal, which featured single-shot and burst firing from fire posts and in movement, by three Patria UT30MK2 CRO vehicles – the ones already introduced into the operational use – and a Patria ABG MK19 to arrive soon.

The Patria AMVs are armoured combat vehicles equipped with a UT30MK2 CRO weapon station, presently the state-of-the art system, and an integrated artillery system with an anti-tank missile system. The system combines the fire power of the three weapons – an automatic MK 44S 30-mm gun, a 7.62×51 M204 machine gun and the long-range SPIKE-LR anti-tank missile system made in Israel.

SPIKE LR is presently one of the best 4th generation guided anti-tank missiles system with a range of up to 4km, which can be operated in fire-and- and-forget mode and in the fire- observe-and update mode. Thanks to the day camera and thermal imager the missile can be used for shooting in any weather conditions.

In addition to the powerful weapon, the UT30MK2 CRO Patria vehicles are equipped with state-of-the-art fire and protection systems. The fire control system enables static and mobile shooting of ground and aerial targets in any weather conditions, thanks to a strong ballistic computer and a weather station.

Unlike other Patria vehicles, the Patria UT30MK2 CRO is provided with a Hunter Killer capability and an automatic target tracking capability.

The modular design of the vehicle and its components enables automatic 360° laser warning system which signals and automatically activates discharges smoke to halt the attack on the vehicle.

An important feature is protection from mines 8 kg TNT.

The Patria AMV is equipped with an automatic 40×53 mm MK 19 grenade launcher designed to inflict damage on enemy manpower and lightly armoured vehicles and covering the dead spaces.

The effective range is 1400 m to 2200 m (max). The launcher is compatible with the existing remote-controlled weapon station fitted to Patria vehicles. The integration of the ABG MK19 system into mechanised platoons provides the mechanised units with additional dimension and capability to fire the targets in dead spaces that cannot be engaged with direct fire.

Following the display the Commander of the Croatian Army, Lieutenant General Boris Šerić praised the displayed capabilities the mechanised battalions “Tigrovi“ and “Gromovi“.

“This system increases significantly the firepower of our manoeuvre units of the guards mechanised brigades, which is one of the most important NATO Capability Targets to attain in the forthcoming period. We saw a segment of the Exercise “Spremnost 2020“ exercise, which was planned on a larger scale, but due to the circumstances caused by the COVID epidemic and the mandatory compliance with epidemiological measures, the exercise took place on several military training grounds. The focus was placed on the assessment of the declared forces for international missions and operations and forces in accordance with NATO’s Capabilities Objectives, and it was attended by 499 members of the Armed Forces from the Croatian Armed Forces, the Croatian Air Force, the Armed Forces and the Intelligence Regiment.

All forces were evaluated combat ready, and mission capable, said Brig. Gen. Šerić and added that in addition to the three Patria CRO 30 L AMVs in the operational use, three more vehicles were in the final testing phase and two more in the last equipping phase respectively, and that all eight vehicles were expected to be delivered by the end of 2020 and fitted with the sophisticated systems.

Emphasising the importance of the introduction of sophisticated technology in the Armed Forces, the Deputy Commander of the Croatian Army Major General Tihomir Kundid stated that the weapon platform provided the Croatian Army with capability to deliver more kinetic energy to the target per unit time, with up to 4 km anti-armour warfare capability and the night combat capability: “The exercise proved the trainedness and ability of the Croatian Army units to skillfully operate the new equipment“, stressed Maj. Gen. Kundid.

All forces that were evaluated in this exercise were evaluated combat ready and mission capable, said General Šerić and added that in addition to the three Patrias CRO 30L already in the operational use, three more vehicles were being tested and two more equipped in the final equipping and that all eight Patria equipped with this sophisticated system should be handed over for use to the Croatian Army by the end of the year“.

In addition to the showcase a static display was set up, with the varieties of the Patria AMVs that belong to the Brigade.

SPIKE LR is presently one of the best 4th generation guided portable anti-tank missiles system with a range of up to 4km, which can be operated in fire-and- and-forget mode and in the fire- observe- and update mode.

The system quality is evidenced in shooting reliability, accuracy and precision(both static and mobile), in single and burst firing mode alike, thanks to a highly stabilised system, a reliable fire control system, bust operating mechanisms, additional ballistic protection for weapons, mechanical and electric components and enables internal loading without exposing the crews.

The system operators take three training programmes – training for operators and instructors to train future operators, the I and II maintenance level mechanics and technologist training, which was partly administered in Israel during the final assembly of the turrets in Elbit’s halls and partly in Croatia during the installation of the turret onto the vehicle.

The 30-mm gun’s range is 3000 m, in a single or burst firing mode (up to 200 grenades per minute and up to 120 grenades per minute using programmable ammunition. The ammunition used includes armour piercing, air burst and programmable. The effective range of the M240 coaxial machine gun is 1100 m, and the rate of fire is 650 to 950 rounds per minute. The SPIKE anti-tank system range is up to 4000 m, the missiles are fitted with tandem explosive warhead and have a target pointing or fire- and-forget capability, and can switch targets in flight.

The main purpose of the Exercise was to evaluate the forces declared for the deployment to operations and missions (a component of the HRVCON to KFOR, the Motorised Company of the Battalion “Vukovi“, the Mechanised Platoon Squadron Patria 30L AMV, the Engineer Combat Support Company, the CIMIC Platoon and the Water Purification and Supply Squadron). The main authority was the Croatian Army Command, and the exercise was conducted by the components of the Croatian Army – the Guards Mechanised Brigade and the Engineer Regiment, and the components of the Croatian Air Force, of the Support Command and of the Intelligence Regiment.