Back to homepage »
Share:
The “Hrvatski vojnik” magazine team visited the Handlers and Military Working Dogs Training Centre "Captain Krešimir Ivošević" in the Barracks "Pukovnik Milivoj Halar" in Dugo Selo (near Zagreb), where 12 dogs are trained for six purposes 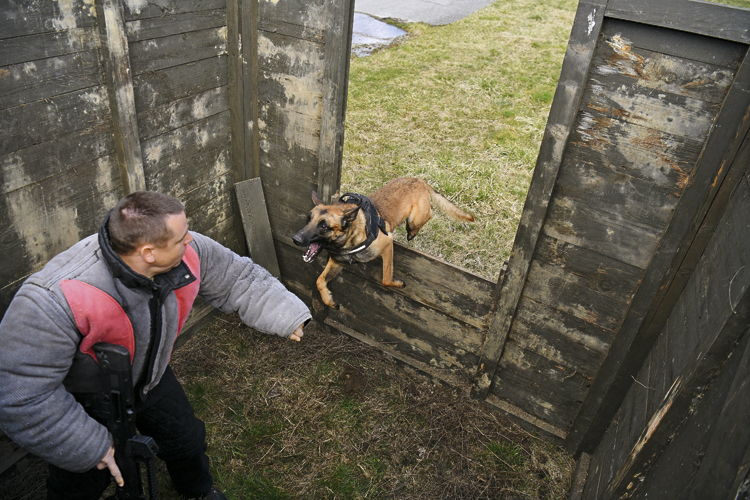 The “Hrvatski vojnik” magazine team visited the Handlers and Military Working Dogs Training Centre “Captain Krešimir Ivošević” in the Barracks “Pukovnik Milivoj Halar” in Dugo Selo (near Zagreb), where 12 dogs are trained for six purposes for the needs of the Military Police Regiment, Honorary Protection Battalion, Special Forces Command and the Ministry of Finance.

“The Working Dogs and Handlers Training Centre “Satnik Krešimir Ivošević” of the Military Police Regiment  approaches each team as a project that starts at the time of litter planning, and we respond to new challenges and requirements promptly. It is highly important for us to promote the importance and role of military working dogs among military personnel and their families, but also  in the wider community” , says Major Jelena Jelen-Orlić, Acting Commander of the Centre.

The magazine team visited the Barracks “Pukovnik Milivoj Halar” in Dugo Selo near Zagreb during the 2021 cycle of handler and working dog courses, whose instructors trained 12 dogs for six different purposes – detection of tobacco and tobacco products, detection of explosives, drug detection, protective purposes, search purpose, as well as a course for guides and dual-purpose dogs. We are training three breeds – Alsatians (German Shepherds), Malinois (Belgian Shepherds) and Dutch Shepherds, proved easiest to train for the required purposes.

“Each breed has its own specific traits, and these three breeds are highly intelligent and achieve very good results. For example, we could have use Labradors for detection only, and not as a guard and protection dog. But if there were a requirement to train another breed, we would train such a breed. It all depends on national and global challenges”, says Major Jelen-Orlić, who stressed that that the Centre promoted humane training programmes and work consists mostly in channelling – or harnessing the instinct in the desired direction according to the required standards.

“Puppies are trained from two months on and are socialised. Once they reach six months they already display propensity for a specific purpose, and their instincts are channelled accordingly.

The final decision on the specific purpose of training is made by the Handlers and Military Working Dogs Training Squad, which connects the teams – the guide and the dog”, explains Major Jelen-Orlić. The success of the teams depends on the handlers’ motivation too. “Motivated teams achieve excellent results” Major Jelen-Orlić who is also the head of the veterinarian dispensary. 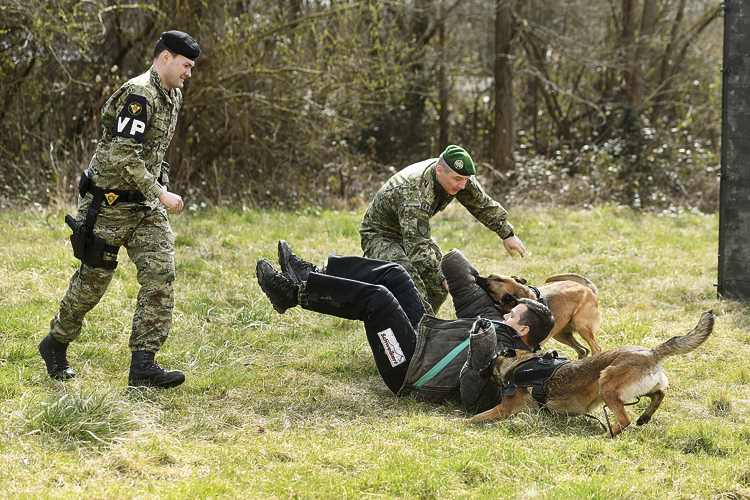 2nd Lieutenant Mihael Lovrić, Commander of the Handler and Working Dog Training Platoon assesses the performance of this year’s trainees: “The first three months were administered inside the Barracks, the dogs are trained for smell detection, and we are now nearing the end of the training. The dogs learned the basics of obedience, the teams are well connected, and we have so far gone through all field conditions. We guided the handlers and dogs through some activities they might come across in their work. For example, the dogs that are designated for the Special Forces Command were taken to other services barracks (the Navy, the Special Forces Command) and exposed to sounds and other stimuli such as helicopters, ships or some other transportation modes, and were conditioned for operation in combat teams and groups”.

The female Arwen, although slightly smaller than Dax, successfully detected tobacco and   demonstrated to have prey drive, and also a strong defensive instinct by jumping up on the trainer.

“Arwen is trained for dual purpose – the detection of tobacco products and the detection of explosives. She is a pretty temperament dog. We have demonstrated the internal and external inspection of the vehicle which they will be their duty at the border crossings. Dax is trained to detect drugs and tobacco products and has a very strong prey drive. Their handlers are well-experienced. We have had good and bad moments over the past six months but we successfully resolved all challenges”, says Staff Sergeant Zdenko Mirt, Senior Instructor for Handler and Working Dogs Training of the Centre. 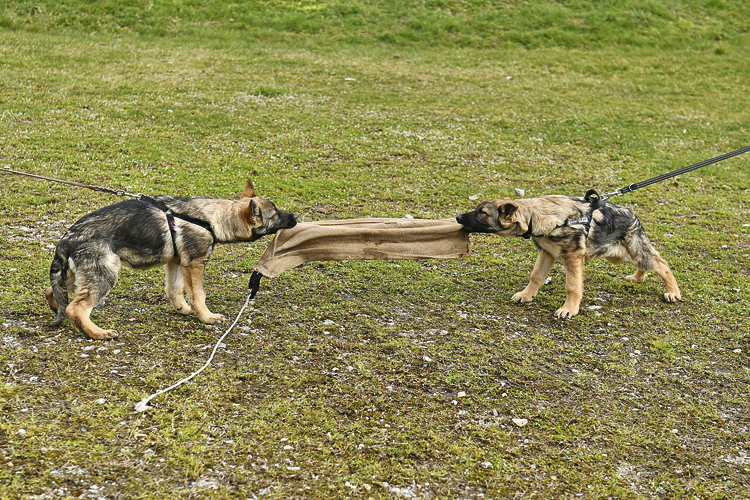 In addition to the ability of two German shepherds trained for the Ministry of Finance, we also witnessed to the trainedness of the Belgian Shepherds Cesar, Demdog and Capo-Sky for the needs of the Special Forces Command, the Honorary Battalion and the Military Police Regiment.

“Cesar is a dog trained for protection and Capo-Sky is also trained in explosives detection”, says 1st Sergeant Silvije Pektorić, the Handlers and Working Dogs Training Platoon CSEL as we watch two protection dogs in an synchronised action aimed at disabling two terrorists in the facility. The dogs undergo training and drills to achieve synchronicity.  It takes a lot of repetition to get the dogs focus each on its target”. The dogs Cesar and Capo-Sky were engaged in a demonstration drill where each dog snatched an arm of the potential attacker and thwarted him in his plans. We also watched the operation of the protective and search dog while determining the identity of an official person.

“Demdog takes position and watches the suspect as the military policeman stops him. In case the suspect resists the identification, the dog is trained to attack him automatically without further order”, says Sergeant Mirt.