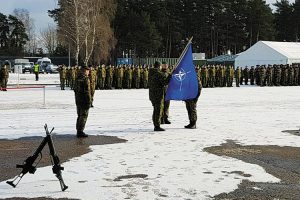 The Deputy Prime Minister and Defence Minister Damir Krstičević on 5 February 2018 attended the ceremony marking the 1st anniversary of NATO’s Enhanced Forward Presence, held in the Barracks “Rukla“ in Lithuania. The ceremony was attended by NATO Deputy General Secretary Rose Gottemoeller, by the President of Lithuania Dalia Grybauskaité, by the Lithuanian Defence Minister Raimundas Karoblis, by the Netherlands’  Defence Minister Ank Bijleveld-Schouten and the Parliamentary State Secretary to the Federal Minister for Defence of Germany Marcus Grübel. Ministar Krstičević congratulated the first successful year of the Enhanced Forward Presence in Lithuania, saying that Croatia was a responsible NATO nation, committed to promoting interoperability, joint training and the exchange of experience, and expressed pride over the performance of the Croatian soldiers – the members of the Battalion “Tigrovi“ – in Lithuania. Minister Krstičević met with the President of Lithuania Dalia Grybauskaité,with whom he discussed the joint Croatian-Lithuanian engagement in NATO Enhanced Forward Presence. The Minister took the opportunity to appreciate Lithuania for being an excellent host to the Croatian soldiers and NATO Allies. Addressing the 1st year of NATO Enhanced Forward Presence in Lithuania, NATO Deputy 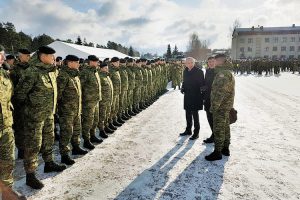 Secretary General stressed that the enhanced NATO commitment conveyed a strong message that the Alliance was strong and united and would treat an “attack on one, as an attack on all.” The Croatian Armed Forces have deployed a 187-member Mechanised Company with 15 AMV Patrias to NATO’s Enhanced Forward Presence; the Battlegroup in Lithuania is led by Germany, and is composed of the members of the Armed Forces of France, the Netherlands and Norway; the Company arrived to Lithuania in early December 2017, and is commanded by Captain Marko Krpan. The Minister and the Chief of the General Staff of the Croatian Armed Forces visited the 1st HRVCON to EFP in Lithuania and Poland in late December 2017.