Back to homepage »
Share:
The 2018 festivities marking the Croatian Navy Day featured also a renaming ceremony of the former Barracks "Neretva" into the“116th Brigade of the Croatian Army", and a formal line-up by the members of the Naval Infantry Company 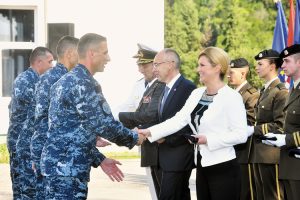 “Having formally received your berets you have joined the Croatian Navy as successors of the glorious Croatian maritime tradition, which was preserved during the hardest days of the Homeland War,” said the Defence Minister Damir Krstičević, congratulating the Croatian marines – the members of the newly established Naval Infantry Company.  THe Minister also said that the Croatian Armed Forces were returning to towns (Sinj, Vukovar, and Ploče and shortly in Varaždin and Pula too) closer to the people. The new territorial distribution ensures timely response to potential risks, challenges and threats and interventions assisting the local populations and civilian institutions if necessary. Minister Krstičević emphasised that the renaming of the Barracks after the legendary 116th Brigade of the Croatian Army was a sign of tribute and gratitude to all the members and their huge contribution to the defence  of Croatia. 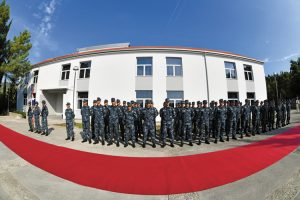 General Mirko Šundov addressed the members of the 116th Brigade, led by the first Commander – Brigadier General (Ret.) Nedjeljko Obradović, and the members of the families of the fallen, deceased and missing defenders from the Homeland War. “The naming of the barracks after the brigades of the Croatian Army is an important decision whereby the Ministry of  Defence and the General Staff of the Croatian Armed Forces paid respect to all members of the brigades and all brave defenders fighting for free and independent Croatia. The inauguration of the Barracks “116th Brigade“ memorialises the wartime brigade of the Croatian Army which will have a lasting place in the history of Croatia. The development of the naval infantry’s abilities and their location in Ploče adds to the security of the area and ensured assistance to the civilian institutions“, concluded the Chief of the General Staff.

The Commander of the Croatian Navy said the Naval Infantry Company was established in response to security challenges, reviving a Croatian Navy’s capability discontinued 15 years earlier. Commodore Raffannelli reminded that during the Homeland War the unit that exercised the capabilty was the 53rd Naval Infantry Battalion that took part in all operations in the Zadar area and in south Croatia. Cdre Raffannelli underlined the engagement of the  members of the Battalion (presently serving as active duty personnel in the Croatian Navy) with the establishment of the Naval Infantry Company and with training of its personnel, incorporating their experience from the Homeland War. Commodore Raffanelli noted that the naval landing operations in the islands and in the littoral, particular in the event of immediate threat, required top equipped and trained forces that are highly mobile, autonomous and flexible. Maritime countries, particularly those with indented coastline attach special attention to the capability. Cdre Raffanelli also said that the Naval Infantry Company would provide support to civilian institutions and the civilians hit by nature disasters and technological accidents, in search-and-rescue actions at sea, along the coast and in the islands, and that the revival of the barracks and of naval landing capabilities was of general interest, increasing the security and the growth of the local community. 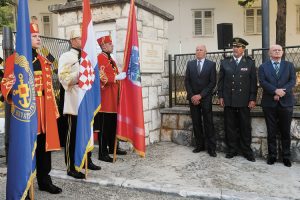 The Mayor of Ploče Mišo Krstičević and the Prefect of the Dubrovnik – Neretva County Nikola Dobroslavić in their addresses praised the return of the Croatian Armed Forces in the area and stressed that it was an important day for the town of Ploče and the County.   The distinguished visitors toured the accomodation facilities and observed a demonstration by the members of the Company, which will conduct the assigned tasks as Naval Infantry Company. .

The 158-member Naval Infantry Company is a unit of the Croatian Navy  Flotilla and  will develop capabilities for limited landing operations, protection and securing of military locations, assistance to civilian population hit by  disasters, and will serve as a core unit for reserve forces.