Back to homepage »
Share:
The navies of Albania, Croatia, Greece, Italy, Montenegro and Slovenia participated in LIVEX ADRION 19, the aim of which was to reinforce the ties and mutual understanding among the participating countries’ navies as well as develop their interoperability in conducting maritime operations 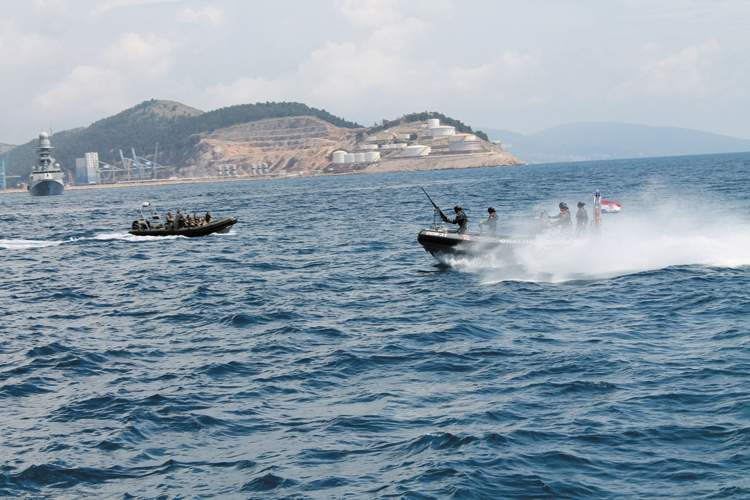 The OOB-31 Omiš coastal patrol vessel took part in international LIVEX ADRION 19, was conducted from 18th to 28th June in the seaport of Bar, the Bay of Kotor as well as the inland waterways and territorial sea of Montenegro.

International military exercise ADRION has been jointly conducted by the member states of the Adriatic-Ionian Initiative since 2006. The objective of the exercise is to reinforce the ties and mutual understanding among the participating countries’ navies as well as develop their interoperability in conducting maritime operations. The initiative was founded during bilateral talks between Greek and Italian navies in 2001 with the aim of establishing co-operation among the countries in the Adriatic and Ionian Seas (Albania, Croatia, Greece, Italy, Montenegro and Slovenia) through jointly conducted computer-assisted exercises (CAX) and live exercises (LIVEX), visits to harbours, seminars, workshops, etc. Croatia hosted exercise ADRION in 2008 and 2014. Participating vessels in LIVEX ADRION 19 included the F-597 Antonio Marceglia frigate (Italy), the OOB-31 Omiš coastal patrol vessel (Croatia), the VNL-11 Triglav patrol boat (Slovenia), the P-133 Lissus patrol vessel (Albania),the P-69 Kristallidis fast-attack craft (Greece) as well as the P-105 Durmitor patrol vessel and the PR-41 Orada tugboat (Montenegro). Aside from these vessels, the Aérospatiale Gazelle and Bell 412 EPI (Montenegro) as well as NHIndustries NH90 helicopters (Montenegro) were also engaged in the interservice exercise.

In the first phase of the exercise, vessels arrived and assembled in the seaport of Bar for operations taking place at berth.  The vessels left the port in the second phase so as to conduct operations at sea, such as tactical manoeuvres, naval blockade and target practice. The analysis of the exercise followed in the third phase.

The fictional scenario saw the exercise participants carry out tasks in the domains of marine communications, search and rescue, interrogation, lining up vessels in conformity with NATO procedures, bypassing and boarding a suspect vessel as well as live-fire exercises. Upon the conclusion of the exercise and return to the port in Split, the shipmaster captain of the OOB-31 Omiš expressed his satisfaction with the reception of his crew, describing the execution of the exercise as impeccable.

“We have presented the Croatian Armed Forces and the Croatian Navy in the best possible manner. All phases of the exercise were carried out as planned. For the first time, the OOB-31 Omiš sailed beyond the outer limit of Croatia’s territorial sea and we are pleased with its performance,” Captain Ante Silić concluded.

The Adriatic-Ionian Initiative was founded at the Conference on the Security and Development of the Adriatic and Ionian Sea in Ancona on 20th March 2000. The first session of the initiative was held the following November in Zagreb. The founding document of the initiative is the Ancona Declaration, which obligates the member countries to co-operate in the areas of culture, economy, tourism, environmental protection, transport, maritime affairs and fight against all types of illegal activities. 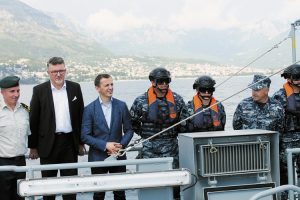 In the context of international LIVEX ADRION 19 and bilateral co-operation between the Croatian Navy and the Montenegrin Navy, the Montenegrin Minister of Defence Predrag Bošković and his associates paid a visit to Croatian coastal patrol vessel OOB-31 Omiš in the seaport of Bar on 24th June. After an initial presentation of its performance, the vessel sailed around Bar’s aquatory in the continuation of the visit. During the passage, the vessel’s propulsion and weapons systems were shown to the visitors. Afterwards, the crew demonstrated their skill level as well as the vessel’s performance in an exercise at sea. Delegates from Croatia included Croatian Ambassador to Montenegro Veselko Grubišić and his associates, the Commander of the Croatian Coast Guards’ 1st Division Commander Hidajet Čobo as well as the Commander of the OOB-31 Omiš coastal patrol vessel Captain Ante Silić and his crew, while the Montenegrin delegation included the Chief of the General Staff of the Armed Forces of Montenegro Brigadier General Dragutin Dakić, the Commander of the Montenegrin Navy Captain Vesko Tomanović and senior military officials from the Cabinet of the Montenegrin Minister of Defence.