Back to homepage »
Share:
“By compiling a list of victims of the Homeland War in Vukovar – 2,717 of them – we pay lasting tribute to them. History commits us to this so that no victim would be forgotten and so that the sacrifice of Vukovar and its people would not be belittled or erroneously reported and interpreted in the future,” says father Ivica Jagodić about a memorial with the names of all victims of the Homeland War from Vukovar which has been put up in the cloister of the local Franciscan monastery

“These names represent people who will spend eternity watching their city live and the Danube flow through it. The list on the glass face has been put up in the most distinguished place in the cloister of the Franciscan monastery – right above the Danube.” This is how Father Ivica Jagodić, Guardian of the Franciscan monastery in the eastern Croatian city of Vukovar, begins to tell the story about a list of all victims of Croatia’s Homeland War of Independence (1991 – 95) from that city – a list that breathes life into Vukovar and the victims’ families. The glass plaque with precisely 2,717 names, which was recently put up in the cloister of the Monastery and Parish of St. Philip and James, gives comfort in times of trouble and guarantees that the Hero City’s victims will stay remembered forever.

The desire that no victim from Vukovar be forgotten and that their sacrifice be meaningful and filled with pride was the principle that guided Franciscans in Vukovar as they compiled the names that stand written on the memorial today.

“It all began at a meeting with parents who had lost their children in the war. They had raised their children to love their homeland and are suffering terribly now that they are gone. This idea had been brewing among local Franciscans for years. We first received an impetus for compiling the list back in 2015 from Father Josip Šoštarić, then parish priest in Šarengrad [a nearby village], who often visited Vukovar. However, it was only during Advent in 2017 that we published the idea in the parish and conventual advertisement sheet. Then, the first, unofficial list was put up in the hallway of the monastery so that the locals and people with ties to Vukovar who came there for Christmas could report any names missing from the list,” says Father Ivica Jagodić, adding that the original list already contained a thousand names. 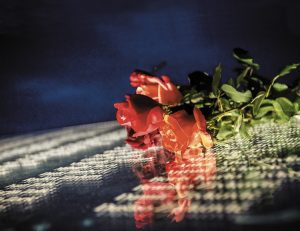 The project of compiling the victims’ names was presented to the public at a press conference and a project team – comprised of Antonija Zaoborni, Marija Hardi, Ena Mor and Darko Raguž – was assembled. So that the compilation of names would be brought to a close, the Franciscans organized another press conference in November 2018, ahead of Vukovar Remembrance Day (18th November). At the conference, the public was informed about the preliminary design of the memorial, which foresaw a plaque with the victims’ names being put up in the gardens of the Franciscan monastery – the only place suitable for such a lengthy plaque. The glass plaque was made by architect Goran Rako’s project office Radionica arhitekture (Architecture Workshop), following many years of deliberation. The font of the letters on it is a work of designer Goran Raukar, while the lightning fixtures are a product of engineer Zlatko Falić’s company Nova Lux. Construction works and landscaping were done by Komunalac, a utility services company from Vukovar, with permission from Zdenka Predrijevac, head of the City of Vukovar’s Conservation Department. The guardian of the local Franciscan monastery highlights: “Everyone made a contribution without asking a financial reward for it.”

The list was compiled for two years and the project was overseen by local Franciscans, who visited various associations, groups, communities and settlements on the territory of the former Municipality of Vukovar. The project was endorsed by Ante Nazor on behalf of the Croatian Homeland War Memorial and Documentation Centre as well as Dražen Ivić from the Ivo Pilar Institute of Social Sciences.

“The young people on team easily entered data into the computer. The list grew and grew until we reached the final count. The entire list was then verified by the State Administration Office in Vukovar-Srijem County, under the supervision of its then head and the current Minister of State Property Mario Banožić. A source of encouragement in compiling the list was the positive feedback from our fellow believers and townspeople. The memorial was set up by the locals. We wanted to give the victims’ families priority in visiting it, but a few days after it had been set up, President of the Republic of Croatia Kolinda Grabar-Kitarović as well as Deputy Prime Minister and Minister of Defence Damir Krstičević came to see it,” says the guardian of the local monastery, adding that everyone involved approached the project with optimism and nobody was called out for having failed to do something. While the list is considered to be final, there is room for writing in additional names, should any be unearthed. 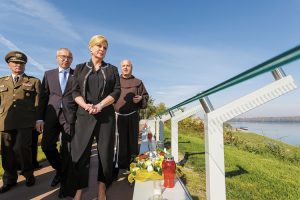 The list on the glass plaque includes Croats in the Civil Defence who defended Vukovar in 1991 as well as people who were imprisoned and killed in Serbian concentration camps. Many of the victims are still officially considered to be missing and a large number of combatants on the list had come to defend Vukovar from other parts of Croatia or from abroad.

When asked what made Franciscans decide to compile a list of all Homeland War victims from Vukovar, Father Ivica Jagodić simply replies: “Our history, our heritage and the new generations made us want to have exact data at our disposal; the latter are the ones who give meaning to the victims’ sacrifice.”

Jagodić emphasizes that the contemporary sons of St. Francis of Assisi have been committed to preserve the memory of victims of the Battle of Vukovar, much like their predecessors in 1918, following World War I. 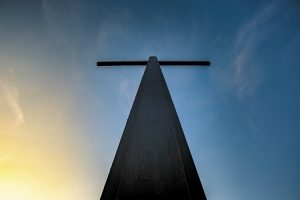 “Our predecessors compiled first names and surnames of people who had been killed or gone missing in WWI and chiselled them into a granite tablet around the Altar of Our Lady of Sorrows. Holy masses have been celebrated for them and the memory of them has thus been preserved among the living. After WWII, our fellow brethren were unfortunately prevented from compiling a list of victims of the communist terror in Vukovar because naming a single victim would have put their lives in peril. Therefore, a list of people from Vukovar killed in WWII does not exist. The most that we can say is that the list is not short, but the exact number of victims has not been investigated. We remember the victims whose children are still alive on 12th April every year,” states Jagodić.

The guardian of the Franciscan monastery in Vukovar points out that the memory of the victims fades with time, so setting up the tablet was a means of preserving that memory. “By compiling a list of victims of the Homeland War in Vukovar, we pay lasting tribute to them. History commits us to this so that no victim would be forgotten and so that the sacrifice of Vukovar and its people would not be belittled or erroneously reported and interpreted in the future. Through prayer and unity of people of faith, we wish to pay respect to all innocent people who went missing or were imprisoned or killed while defending the sovereignty of the Republic of Croatia, regardless of their nationality,” explains Father Ivica Jagodić. He and his brethren wanted to give special consideration to those whose whereabouts are still unknown and whose names are not recorded anywhere. The memorial may be of comfort to their loved ones on difficult days, such as All Saints’ Day (1st November) or Vukovar Remembrance Day. 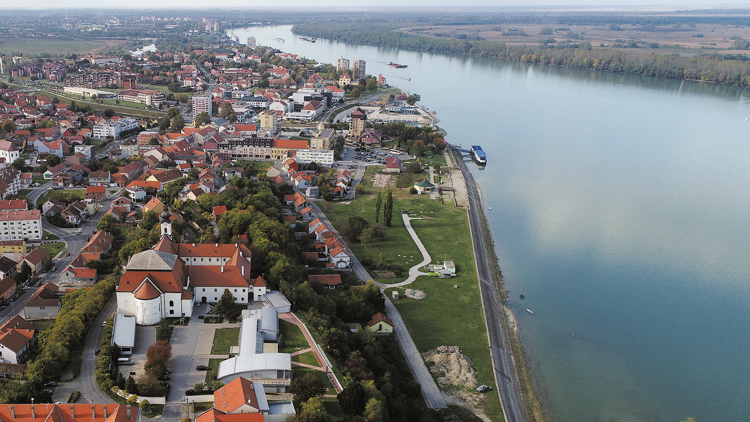 “Now, one can express one’s eternal gratitude in the cloister of the Franciscan monastery by laying flowers, lighting candles and saying a prayer for every person on the list,” adds the guardian of the monastery. That way, the sacrifice of every victim on the list will not be rendered senseless, not today and not in the future.

“The names inscribed over the Danube are like a ‘city on a hill’. They are elevated high above; everyone can see them and find inspiration for common good, love and sacrifice in them. Anybody who sees the 2,717 names on this list may join the psalmist in shouting with admiration: ‘May my tongue cling to the roof of my mouth if I do not remember you’ (Psalm 137). Not forgetting these victims means giving life to Vukovar and families in it,” concludes Father Ivica Jagodić.