Back to homepage »
Share:
The members of the Special Forces Command performed two practice jumps at Lučko Airport with free opening of parachute, with the support provided by the Croatian Air Force 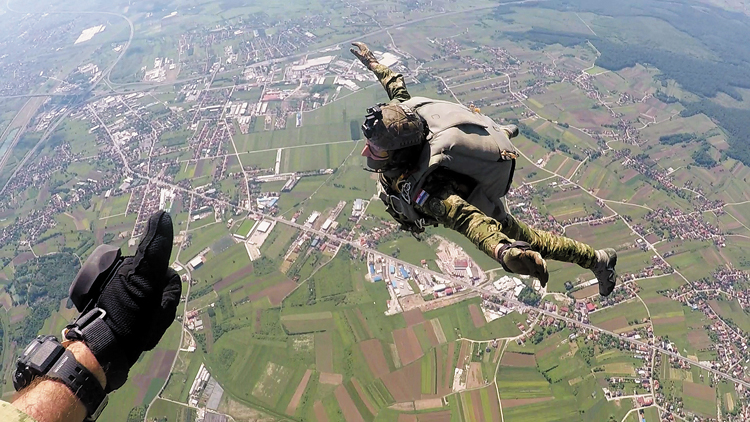 The “Hrvatski vojnik” magazine team visited the military airport at Lučko, to observe practice parachute jumps by eight members of the Special Forces Command, with the support of the Croatian Air Force.

The trainees use the equipment normally used for training and tactical flypasts, the U.S. MC5 parachute and some combat equipment”.

After jumping from the plane, paratroopers descend in a free fall for a brief while before opening the parachute. They steer the parachute towards a drop zone on the ground, close to each other as possible to perform the task jointly and to stay close.

The participants took a two-week basic  parachute training, comprised of the ground preparations (lectures, emergency procedures, ground preparation and parachute and parachute packing) and of the hands-on part, including five parachute jumps, one performed at night time with equipment and weapons. The basic parachute training is conducted with the assault parachutes and qualifies the trainees as military paratroopers capable of performing jumps during exercises, with overall equipment at day and night time.

The advanced parachute training with the use of the wing parachute, which enables the paratroopers perform Accelerated Free Fall jumping, opening the parachutes at high altitudes and remaining unnoticed. In that way paratroopers can reach the spot miles off the landing zone and achieve surprise.

As a rule the AFFs are performed by small teams at night time and are not envisaged in classic assault actions”, says 1st Sergeant Vicencinović. The AFFs are conducted for infiltration of small groups of well-trained soldiers behind the enemy lines or in attacks on high value objects.