Back to homepage »
Share:
The final evaluation of the components of the 4th Croatian Contingent before their deployment to NATO’s Enhanced Forward Presence in the Republic of Poland was held at Training Range “Eugen Kvaternik” from 18th to 20th February 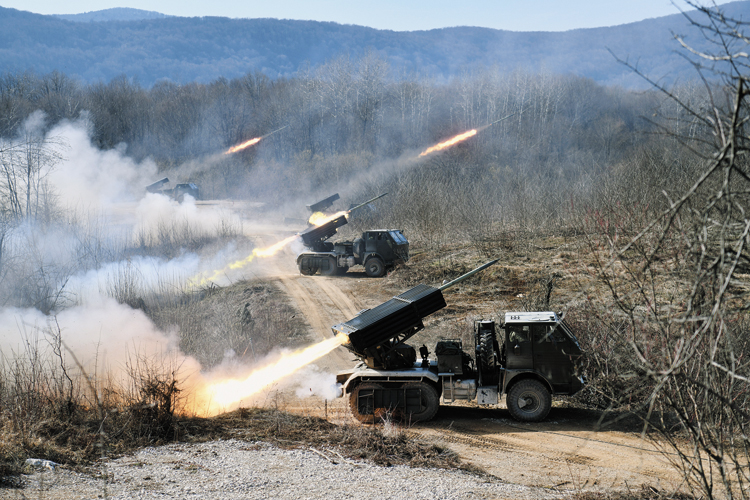 The final live-fire exercise in the evaluation of the 4th Croatian Contingent’s combat readiness for NATO’s Enhanced Forward Presence in the Republic of Poland (eFBPG-USA) was held at Training Range “Eugen Kvaternik” in Slunj on 20th February 2019. The contingent will be a part of a battle group led by the USA.

The bulk of the 4th Croatian Contingent is comprised of the members of the Mixed Artillery Battalion. They will be deployed to NATO’s activity in the Republic of Poland in April, along with the members of the Support Command, the General Staff and the Military Police Regiment. The in-barracks evaluation of the contingent’s plans as well as its personnel and logistic readiness for the mission kicked off on 18th February. It was followed by the in-field evaluation of tactics, techniques and procedures in realistic situations on 19th and 20th February.

During the evaluation, the contingent demonstrated their tactics, techniques and procedures in completing a tactical course, occupying an assembly area and reacting to a complex attack, a chemical, biological and nuclear attack as well as indirect fire. At the climax of the exercise, the contingent had to provide fire support in a defensive operation and in a counterattack.

The Head of the Operational Section of the Mixed Artillery Regiment Lieutenant Colonel Davor Stefanović, who also acted as the director of the exercise, explained that the contingent had prepared for the exercise for five days, while the evaluation itself had lasted three days.

“The contingent members’ readiness is evaluated in accordance with a matrix of capabilities that they need to possess for the tasks awaiting them in the area of operation. In the final live-fire exercise, the 122-mm Self-Propelled Multiple Rocket Launcher Battery demonstrated its most important capability – direct firing,” Lieutenant Colonel Stefanović said and added that the evaluation was being conducted by the Croatian Army’s Evaluator Team, which would reach their final verdict on the contingent’s readiness for the mission after the live-fire exercise.

The contingent is comprised of 80 members. According to the Commander of the 4th Croatian Contingent Major Predrag Srđenović, the contingent began training for their tasks in the Republic of Poland last October.

“As this is the fourth contingent going to the Republic of Poland, our predecessors’ experiences have helped us a great deal. The first two contingents have already shared their experiences with us. We are also in touch with the members of the third contingent, which is currently in the area of operation in the Republic of Poland. Their experiences are immensely valuable to us,” Major Srđenović said. Battle Group Poland is comprised of several units, which are led by the soldiers from the U.S. Armed Forces. Battle Group Poland is also comprised of the members of the armed forces of Romania, Poland and the United Kingdom.

After the live-fire exercise, the Evaluator Team of the Croatian Armed Forces concluded that the 4th Croatian Contingent was ready for the deployment to the Republic of Poland, since they had demonstrated a high level of professionalism in the execution of their tasks.

“The Evaluator Team of the Croatian Army has found that the 4th Croatian Contingent possesses all necessary combat capabilities and is thus ready for deployment to the area of operation in the Republic of Poland, where they will be a part of a battle group led by the United States of America in NATO’s Enhanced Forward Presence. During the evaluation process, the candidates for deployment demonstrated a remarkable level of professionalism and dedication in the execution of their tasks. They have shown that they will represent the Republic of Croatia and its armed forces within the eFPBG-USA in the Republic of Poland with dignity,” said the Head of the Evaluator Team Lieutenant Colonel Karlo Krešić of the Croatian Army’s Training and Doctrine Command “Fran Krsto Frankopan”.

After the 122-mm Self-Propelled Multiple Rocket Launcher Battery had conducted the live-fire exercise, the Head of the Team for the Supervision of Evaluator Teams of the General Staff of the Croatian Armed Forces Colonel Mijo Kožić pointed out: “NATO’s Combat Readiness Evaluation (CREVAL) system for land forces was fully implemented by the evaluators from the Support Command and the Military Police Regiment. This evaluation has proven that the Croatian Armed Forces’ system of readiness is interoperable with the standards set by NATO’s Allied Command Operations. I want to applaud our certified CREVAL evaluators for their hard work. The Evaluator Team of the Croatian Armed Forces drew up all the documents in accordance with the regulations for the deployment of our units to NATO’s Enhanced Forward Presence.”

The Commander of the 4th Croatian Contingent Major Srđenović was pleased with the live-fire exercise, stating that it presented the peak of the contingent members’ training and readiness evaluation.

“The members of the 4th Croatian Contingent are ready for the mission. In the past two days, they have demonstrated a high level of motivation and respect for their job. I am pleased with what they have demonstrated, but they will best prove their professionalism in the execution of their tasks in an international environment,” Major Srđenović concluded and stated that the Croatian soldier’s main motive was to demonstrate their interoperability, functioning, communication and the usage of artillery procedures with other nations’ armed forces in the Republic of Poland.

During the exercise, the 122-mm Self-Propelled Multiple Rocket Launcher Battery carried out the following tasks: the production of an Operation Order (OPORD) and other planning documents for the execution of a given task, the establishment of the command and control elements, the deployment to and from the area of operation, movement to the artillery area, preparation for combat operations, fire support, combat and service support operations and the execution of tasks in accordance with the matrix of required capabilities.

Other demonstrated capabilities included survival (force protection, NCB protection, counter-IED efforts), the execution of logistic functions (maintenance, transport, supply and medical support) as well as the establishment and usage of communication and information systems during the planning, preparing and conducting the tasks.