Back to homepage »
Share:
The official statistics indicate as many as 7,807 Croatian citizens and defenders were taken prisoners and held in prisoner camps and returned to the area under the control of the Republic of Croatia 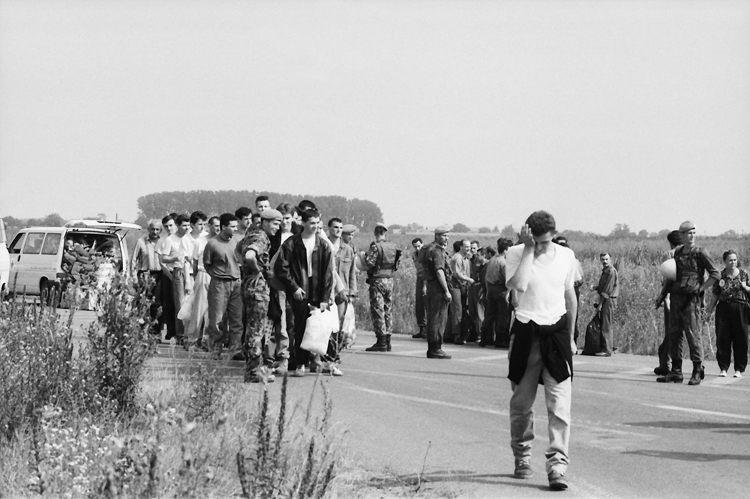 The war prisoners exchange held at Nemetin (on nobody’s land between Nemetin and Sarvaš, near Osijek) on 14 August 1992 was a mass exchange of the Croatian prisoners from the Serbian prisoner camps, mostly defenders of Vukovar, was the largest  exchange during the Homeland War. Many of the 662 prisoners later said 14 August is their second birthday. The day was preceded by lengthy and uncertain negotiations.

Shortly after the outbreak of the Homeland War and of aggression on the Republic of Croatia the release of Croatian defenders and civilians from enemy camps became a burning issue and a priority task of the Croatian Government.  Under the Regulation of the Croatian Government of 27 September 1991 a Commission for the Treatment of Persons Captured in Armed Conflicts in the Republic of Croatia, tasked with repatriation and exchange of prisoners of war in accordance with the provisions of the Geneva Convention relative to the Treatment of Prisoners of War.

The role of the members of the Commission was to negotiate, and the Commission represented the Republic of Croatia in the negotiations with the opposing side. On 6 November 1991 the representatives of the Croatian Government and the Armed Forces of the Socialist Federal Republic of Yugoslavia signed a Prisoner Exchange Agreement, in the presence of the representatives of the European Community Monitoring Mission. It served as a basis for the future exchanges, negotiations and agreements. The parties agreed that the exchanges would be conducted according to the principle of “all for all”, the mediating role of the International Committee of the Red Cross (MOCK) was accepted, as well as its activities of visiting and registering prisoners of war in the camps. The agreement also agreed that the term “prisoner” includes all persons captured and deprived of their liberty in connection with the armed conflict in the Republic of Croatia, regardless of whether court proceedings have been initiated against them and regardless of the place of capture and territory.

The Agreement was useful and necessary, but each exchange that ensued was difficult and uncertain battle. The realisation of the exhanges was uncertain, and there was always the risk of thwart by the opposing side. In many cases the Serbian side delayed or blocked the already agreed exchange in the last minute, sometimes even without explanation. They would simply not bring the prisoners on the list for the exchange, and there were also the situations – as in Karlovac in December 1991 – that the exchange was used as an opportunity for a surprise attack on the Croatian positions at Turanj (a quarter of Karlovac badly hit in the Homeland War).

However, the exchanges did take place, and the appearance, the wounds and testimonies of more and more released Croatian defenders and civilians revealed the horrifying reality of Serbian camps. The world’s political elite, especially in Europe, abhorred the existence of prisoner camps in Europe in late 20th century, nobody was charged for the camps at Stajićevo or Sremska Mitrovica.

During the first half of 1992 negotiations and diplomatic efforts achieved new agreements, as evidenced by the agreement with the Yugoslav Army in Pecs on 6 May 1992, through a strong pressure by the association of mothers (“Bedem ljubavi” – Mothers for Peace) on the release of Croatian soldiers serving in the JNA, attended by the representatives of the International Committee of the Red Cross.

In late July 1992, the Croatian Deputy Prime Minister Mate Granić signed an agreement on the repatriation and exchange of all prisoners in Geneva with the then Prime Minister of the Federal Republic of Yugoslavia Milan Panić and the representative of the International Committee of the Red Cross Corneli Sommarug in Geneva. An especially important part of the Agreement, confirmed in Budapest on 7 August and certified with the signature of then Prime Minister of the Republic of Croatia Franjo Gregurić, pertained to the exchange of prisoners that took place at Nemetin, based on the list of prisoners registered by the International Committee of the Red Cross with both sides by July 1992. The parties to the agreement were obliged to recognise and successively release the remaining prisoners in the Republic of Croatia and the Republic of Serbia whose names were not in the ICR list. Also the sides agreed to pass legislation on amnesty, exempting all prisoners from criminal prosecution, except where demanded by the international law.

Croatia duly fulfilled all its obligations under the Agreement. As many as 415 persons were brought for exchange, 156 of whom refused to be exchanged, and nine persons on the ICR list were not brought on the grounds of criminal charges against them that were not related to armed conflict. The Yugoslav side brought 666 people to Nemetin for exchange, four of whom refused repatriation, but among them were not the persons from camps in Sombor,  Padinska Skela, Knin, Manjača, Beli Manastir, Dalj etc. During the exchange the representatives of the Army of Yugoslavia confirmed their obligation before the ICR and UNPROFOR to release all persons by 10 September 1992 at the latest, but that agreement was later thwarted by the Serbian side.

The first major exchange of POWs in the Homeland War took place in Bosanski Šamac on 9 November 1991, when 353 prisoners of war were exchanged, mostly from the Manjača camp, most of whom had been detained at the occupation of Hrvatska Kostajnica on 12 September 1991. In the course of 1991 more than 2,000 POWs were exchanged and released, and by the end of the Homeland War in 1996, when the last exchange of prisoners of war took place, as many as 7,807 people had been exchanged or released.

The prisoners released exchange in Nemetin were the Vukovar defenders and the wounded from the Vukovar Hospital, from Morinje, the Military Investigation Prison in Belgrade and  the Military Prison in Niš Some of the then released Croatian war veterans were serving long prison sentences or subjected to paralegal court proceedings, in which three of them had received  death sentences.

The Serbian side brought a total of 662 persons to Nemetin for exchange, of which 573 were Croatian defenders and 89 civilians; also 657 male and five female prisoners.The oldest prisoner was 67 and the youngest 16. Eight prisoners were 16 -18 years old, and two were older than 65.

At the initiative of the Croatian Association of Prisoners of Serbian Concentration Camps the Croatian Government sent the proposal to the Croatian Parliament, based on the official list and to commemorate the release of the most Croatian defenders and civilians from detention, to proclaim 14 August the Remembrance Day for prisoners of enemy camps during the Homeland War.