Back to homepage »
Share:
Following a 2-week stay in the "Pukovnik Predrag Matanović" barracks in Petrinja and negative COVID-19 tests, the members of the 6th Croatian contingent were sent to NATO's reinforced front presence in Poland 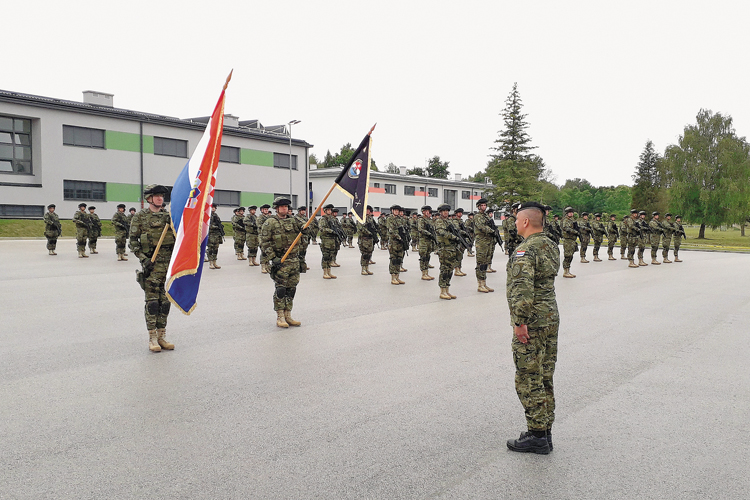 The 6th HRVCON is composed of 80 members (six females) of the Croatian Armed Force , and is commanded by Captain Antonio Burazer, who stressed that all members had a high level of trainedness  and created a good team, prepared for the tasks and challenges during the deployment.

Following a 2-week stay in the “Pukovnik Predrag Matanović” barracks in Petrinja and negative COVID-19 tests, the members of the 6th Croatian contingent were sent to NATO’s reinforced front presence in Poland.

The Deputy Chief of the General Staff of the CAF and the brigades’ commanders extended wishes for a successful mission and dignified presentation of Croatia in the international environment.

The 6th HRVCON Commander, Captain Antonio Burazer, stressed that all members had achieved a high level of training and made a good team, prepared for all the tasks and challenges that await them in Poland.

During the final live-fire exercise “Vulkan 20/1” and the evaluation of the 6th HRVCON  conducted in the “Eugen Kvaternik” training range near Slunj in March, both firing squads of the MRLS Battalion and the command platoon displayed high readiness, which for me and other platoon commanders is very important and motivating on our way to Poland.

This is my first international mission in my career, I hope the work in an international environment will offer invaluable military experience. As the commander of the 1st Firing Squad of the “Vulkan” M92 Battalion, I will do my utmost to perform my tasks in a responsible and professional manner and to contribute to the high international reputation of the victorious Croatian Armed Forces.

Before our engagement in NATO’s Enhanced Forward Presence in Poland we took demanding and often exhausting training in our base and elsewhere and have thus prepared for the final exercise and evaluation in the “Eugen Kvaternik” training range. Luckily, we completed the pre-deployment training and evaluation prior to the pandemic breakout, and litary range. Fortunately, we went through and completed the preparation and evaluation process before the epidemic was declared, so we are leaving for Poland fully prepared and motivated.

On my first assignment in an international mission, as Signal Squad Commander I am looking forward to co-operation with colleagues from partner countries, exchange of knowledge and new experiences.

The preparations were demanding and took sacrifice, and we are now ready for all the tasks and challenges in the international environment. We are glad that after the quarantine we tested negative to COVID-19, and that in a day or two our mission in Poland begins.

I was already engaged in NATO’s Enhanced Forward Presence as a MRLS gunner in 2018/19. In the meantime I have been promoted to NCO and am assigned as a firing squad commander. I expect to get some new experience and see new challenges, a successful international co-operation, and I am looking forward to joint training with other components of the Battlegroup Poland.

We underwent a 6-month intensive pre-deployment training for the EFP activity in Poland, during which our commanders upgraded our knowledge and readiness. Throughout the time due attention has been given to safety, which increased our self-confidence. We are glad that the hard work was crowned at the final exercise, for which we received commendations.

I expect to hone all my military skills during the mission in Poland, particularly as MRLS gunner. I will work hard to carry out my tasks of our squad, platoon and Contingent the best I can.

In addition to the joint training with the 6th HRVCON to EFPBG POL, as a signal specialist I took the courses preparing for efficient autonomous operation of satellite systems.

During the EFP in Poland I expect to apply the acquired skills in an international environment, and to further upgrade them and acquire new experience during the training with the allies, alongside the colleagues from the CIS team.

As members of the National Support Element (NSE) we took the pre-deployment training in the Logistics Training and Doctrine Centre in Požega, and the joint training with the members of the 6th HRVCON. We were also familiarised with the lessons learned from the colleagues of the previous Croatian contingents.

I expect to acquire new knowledge and experience and make acquaintances and friends with colleagues from the Battlegroup, and to learn about the Polish people and culture.

We followed a phased pre-deployment training, so in addition to the joint training with the 6th HRVCON to EFPBG POL we also received specialist Military Police training.

My expectations from the EFP in Poland are exchange of experiences with other nations of our Battlegroup and further professional development. The Military Police team I belong top is a tactical element of the higher-level command. According to our legal authority, we are engaged in military-police operations and activities in the assigned area of operation.