Back to homepage »
Share:
The Agreement has been signed by State Secretary for Defence Tomislav Ivić and by the Director of the Multinational Special Aviation Programme Lieutenant Colonel Tomislav Pušnik 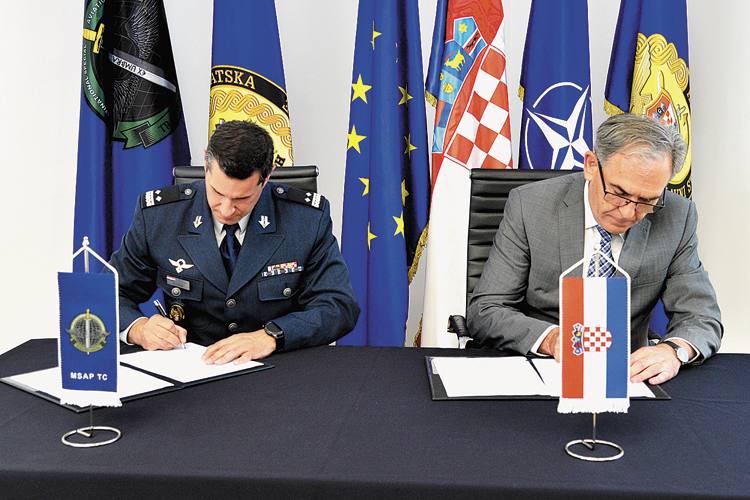 The Agreement, outlining the material, logistic, administrative and personnel support to be provided by the Ministry of Defence for the operation and development of the MSAP TC, has been signed by State Secretary for Defence Tomislav Ivić and by the Director of the Multinational Special Aviation Programme Lieutenant Colonel Tomislav Pušnik.

State Secretary Ivić said that by taking the role of the Host Nation Croatia undertook an important step towards further development of the Alliance through an international training programme as a comprehensive co-operation framework.

“We are proud that the Centre will train the best pilots for special air operations from Croatia, Hungary, Bulgaria and Slovenia and am extending congratulations to the member countries on their achievements to date”, said State Secretary Ivić.

The Chief of the General Staff of the Croatian Armed Forces Admiral Hranj said he firmly believed the MSAP TC based at Zemunik would in future be converted into a NATO Centre of Excellence.

The Director of MSAP, Lieutenant Colonel Tomislav Pušnik said the establishment of MSAP was of huge importance for all participating countries, in view of NATO SOF standards applied in training, and the enhanced interoperability of special air forces.

“The project is still in an initial phase, as a fresh start, but we have high ambitions, and we believe that through hard work we can achieve our goal – to have the MSAP TC converted into a NATO Centre of Excellence”, said Lt. Col. Pušnik.

Deputy Director of MSAP TC Lieutenant Colonel Peter Simon commended the development and operation modality of the MSAP, and emphasised that it had been supported by NATO SOF   Headquarters and the U.S. Special Operations Command since the very beginning.

”I am extending warm appreciation to the Republic of Croatia for hosting the programme and the commitment which is vital for its success, on behalf of the international members and trainees“, said Lt. Col. Simon.

Lt. Col.  Rashkov and Lt. Col. Oblak agreed that the exchange of expertise and knowledge was the essential aspect of the training, and that investment into special air forces was a direction for development of the armed forces.