Back to homepage »
Share:
The team of the “Hrvatski vojnik” magazine visited the Barracks “Pukovnik Mirko Vukušić” at Zemunik on a technical day, when the air technicians are busy checking, inspecting and maintaining the aircraft and the helicopters 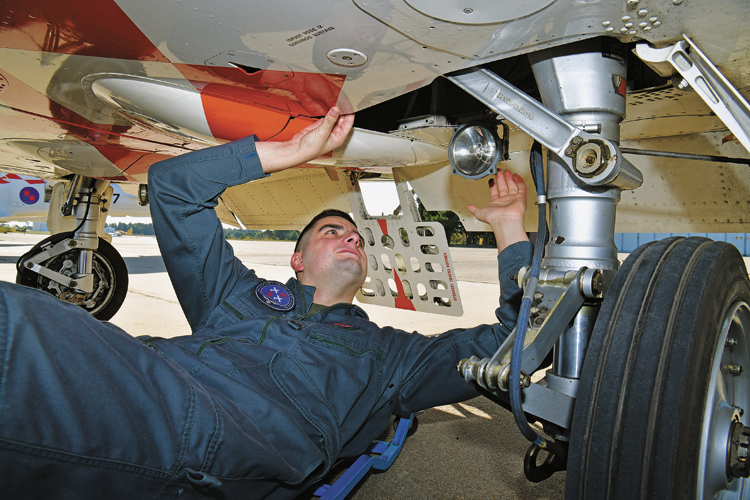 The team of the “Hrvatski vojnik” magazine visited the Barracks “Pukovnik Mirko Vukušić” at Zemunik on a technical day, when the air technicians are busy checking, inspecting and maintaining the aircraft and the helicopters of the three squadrons of the 93rd Wing of the Croatian Air Force.

The apron of the Barracks “Pukovnik Mirko Vukušić” at Zemunik on Mondays is usually crowded. Almost all assets of the 392nd Fixed-wing Squadron, of the 393rd Helicopter Squadron and of the 855th Firefighter Squadron of the 93rd Wing of the Croatian Air force are displayed for the thorough inspection by the aircraft maintenance technicians.

The Hrvatski vojnik team visited the 93rd Wing of the Croatian Air Force during a maintenance day to talk to the members of the three units who may be not in the limelight but are essential for the air force. The busiest personnel during the maintenance days are Level I maintenance technicians, for whom the weekly inspection is the most thorough and detailed task.

Each flight in general is preceded by an inspection to check that everything is in order, but on Mondays the maintenance personnel start the aircraft engines, perform compressor washing  and the like”, says the Commander of the 1st Platoon of the Aircraft Maintenance Company of the 392nd Fixed-wing Squadron 2nd Lieutenant Toni Zdrilić.

The members of the Company are tasked with Pilatus PC -9M and Zlin 242L aircraft maintenance, and the check on each aircraft is executed by at least four members of different specialties.

The A&P technicians check the aircraft frame and powerplant, the instruments, radio and electrical equipment check the electronic devices. The inspections on maintenance days take five to six hours and no flights are scheduled, unless emergency assistance is requested by the Coast Guard.

The Company also provides support to the Coast Guard and the Aerobatic Group “Wings of Storm” of the Croatian Air Force.

The responsibility of the ground crew

“The checklists are very clear and binding. The flight crews and we have a trust-based relationship. The duty of the ground crews in the Air Force – basically our duty – is to keep aircraft operable. We have to be 100% sure that everything is in order, without anomalies and uncertainty”, said 2nd Lieutenant Zdrilić.

The liaison between the pilots and operational control officers and the technicians is provided through the controllers of the Level I maintenance and servicing, whose duty is to ensure the necessary means for the pilots upon receiving the flight plan.

“For instance, if five aircraft have been designated for a mission, my job is to prepare all five aircraft care of them, which means to ensure fuelling and oxygen dispensing and the pre-flight inspection. As Level I maintenance controller I can perform inspection of more aircraft, but during the maintenance day, as technician, I only have time for one”, says Staff Sergeant Marinko Marijačić. 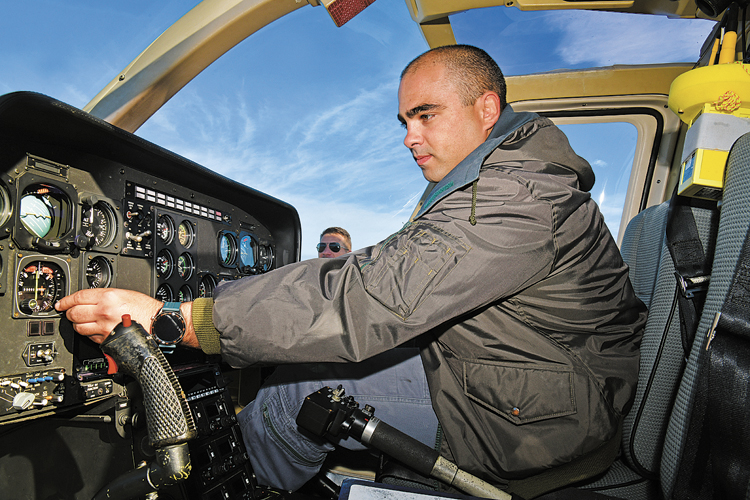 On the apron next to the Pilates aircraft we met Private Franko Žunić, a technician specialised for level I maintenance of the PC-9 aircraft, from the first generation of the holders of scholarships from the Ministry of Defence.

“On maintenance days I usually do pre-flight, turn-around checks and post-flight inspections, but today I have been assigned with maintenance of an aircraft for the Croatian Coast Guard, should they require our assistance. The aircraft technician job is dynamic, demanding with a high responsibility”, says Pvt Žunić.

The members of the Aircraft Maintenance and Servicing Company of the 393rd Helicopter Squadron are assigned with the maintenance of the two helicopters.

Our Company is tasked with the Level I and Level II maintenance. The weekly inspection is the Level I of maintenance and includes a detailed check of the helicopters, assemblies and all devices taking some five to six hours, and the pre-flight inspection takes two hours. One A&P and radio electronics and aviation technician is assigned to the maintenance of the Bell helicopter, supervised by a controller. Kiowa maintenance staff includes an A&P and instruments, radio and electrical equipment technician”, says Captain Marin Birša, Deputy Commander of the Aircraft Maintenance and Servicing Company.  The technicians tasked with Kiowa Warrior maintenance are trained for the Level I and Level II maintenance. Among them is Corporal Ivan Miličević, a specialist in instrument, radio and electrical equipment and for aircraft armament.

“I was in the first group of trainees instructed by the U.S. Kiowa Warrior maintenance instructors – the Level I and Level II maintenance of instruments, radio and electrical equipment.  I am also trained for the Level I and II maintenance of Bell 206B helicopters”, says Cpl.  Miličević. Comparing the two assets, Cpl Miličević says Kiowa helicopters are more complex helicopters and have more in-built devices, instruments and radio and electrical equipment and are more complicated to maintain.

After talking to Cpl. Miličević during his helicopter checking job, we headed towards the 855th Firefighter Squadron. Unlike the summer months, when the personnel is on stand-by 24 h a day; outside the firefighter season they take firefighter tours of duty and conduct training, so the period is less intensive for the technicians, who draft aircraft maintenance plans for the following firefighter season.

“In a demanding season, with lots of sorties we also perform maintenance more often – pre-flight inspections,  turn-around checks, post-flight inspections, weekly inspections, but also 50-hour and 100-hour inspections. The aircraft need to be checked thoroughly checked prior to each flight”, says Sergeant Major Miron Dominis, aircraft technician of the Aircraft Maintenance and Servicing Company of the 855th Firefighter Squadron. SM Dominis also said that the past firefighter season was calmer with less fires, and the technicians were under less pressure than in previous seasons. 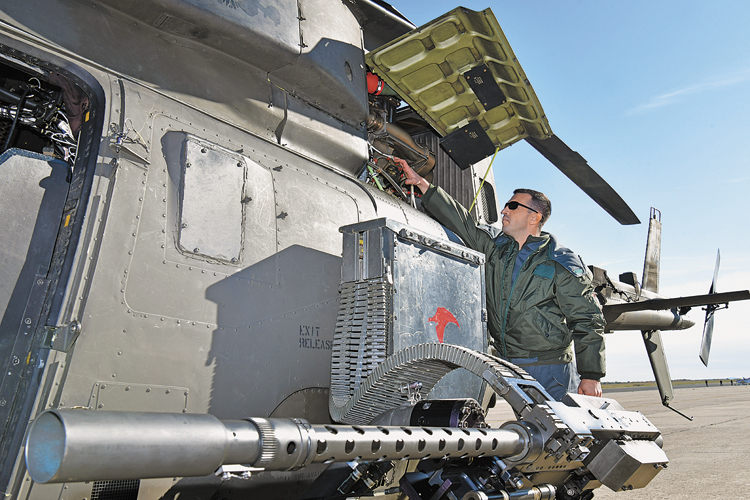 “The Level II includes preventive and corrective maintenance. Preventive maintenance comprises maintenance of resources, with aircraft parts removed and replaced regardless of the condition, while corrective maintenance is carried out to rectify the faults. We also perform periodic inspections (the 150-hour, 300-hour or annual inspections, depending on the order). The Level II maintenance is a responsibility of three squads – an A& P (aircraft and engine) squad, an instruments and radio and electrical equipment squad and one armament squad. At annual inspections we follow checklists of the required procedures and maintenance schedules precisely set by the manufacturer. The inspections may take up to 10 working days. One aircraft is inspected by three A&P technicians, their controllers, two instruments, radio and electrical equipment technicians and their controllers.

In accordance with the contract concluded between the Ministry of Defence of the Republic of Croatia and the Technical School in Zadar the 3rd and 4th grade secondary school students have received their practical training in the units of the 93rd Wing for years.

The 3rd graders attend the technical inspections on Mondays from October through June, and 4th graders attend them on other days. In view of the anti-epidemic measures the students are dispersed to three units. This model of practical training has proven very good as these students are the pool of scholarship holders who are later introduced into the aircraft maintenance system.

Through the secondary school programme these students are taught and instructed to maintain aircraft and helicopters, and as scholarship holders of the Ministry of Defence they take specialist training in the Air Force Base at Zemunik the and specialise in maintenance of a given type of aircraft or helicopters.