Back to homepage »
Share:
“The Ministry of Defence and the Croatian Armed Forces owe all of their victories and conquests to the patriotism, volition, knowledge and experience of their staff. Aside from all human qualities at the core of a Croatian soldier’s character, success is also greatly contingent on knowledge, which is the key to the continuous enhancement of the most valuable potentials of the Croatian Armed Forces’ branches,” stressed Deputy Prime Minister and the Minister of Defence Damir Krstičević 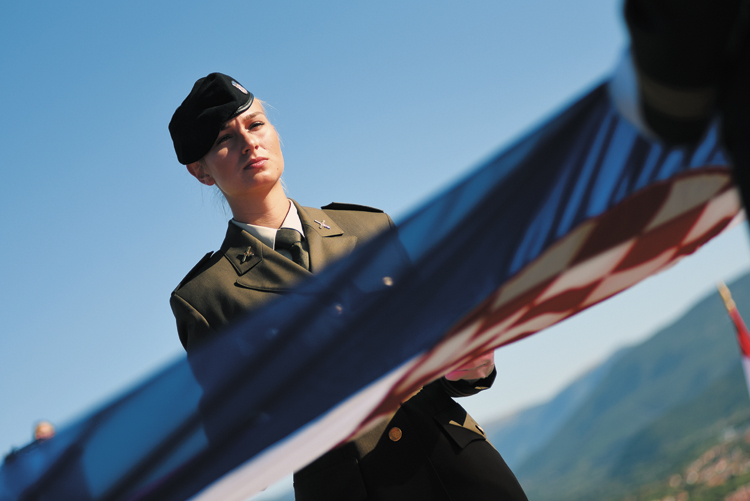 In the presence of high-ranking civil and military officials as well as their friends and relatives, the 17th class of cadets at the Franjo Tuđman Croatian Defence Academy took oath at a ceremony held in Knin, a town in Dalmatian hinterland, on 17th September.

Oath was taken by 122 cadets, of whom 86 belong to the sixth class of the Military Engineering and Military Leadership and Management study programmes, 28 cadets make up the second class of the integrated undergraduate and graduate study programme Military Naval Studies, while eight cadets are candidates for military pilots. The ceremony also marked the beginning of university education for 16 cadets from Croatia’s partner states Bosnia and Herzegovina, Kosovo and Montenegro as well as a cadet of the Ministry of the Sea, Transport and Infrastructure. 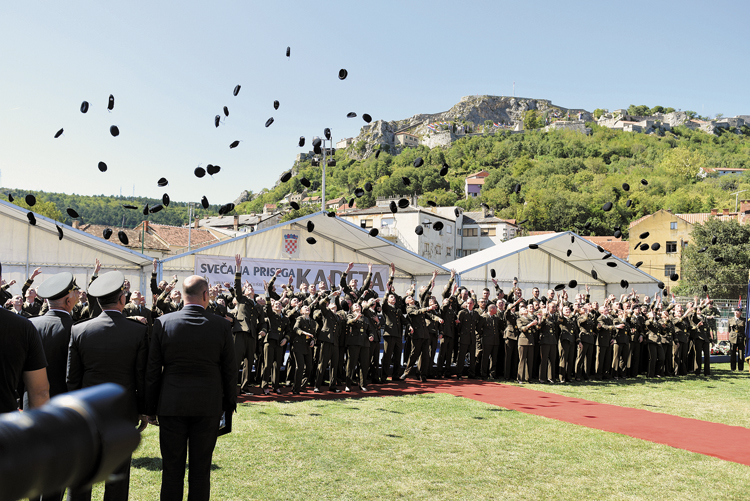 Presentation of Berets on Knin Fortress

The formal ceremony began with a line-up of cadets on Knin Fortress, where the national flag was raised on a mast to the sound of the Croatian anthem at the same time when it was raised in that same spot in 1995 following the conclusion of Operation Storm. Afterwards, cadets recited the Cadet Prayer and were presented with berets by Minister Damir Krstičević, Gen. Mirko Šundov, Lt. Gen. Drago Matanović, the Commandant of the Franjo Tuđman Croatian Defence Academy Maj. Gen. Mate Pađen, Special Adviser to the Minister of Defence Božo Kožul, the Mayor of Knin Marko Jelić, the Chief of the Petar Zrinski Military Schools Centre Col. Damir Stručić and the Commander of the Cadet Battalion Capt. Hrvoje Šimleša.

After the presentation of berets, the cadets paraded through the streets of Knin to FC Dinara’s stadium.

After a rendition of a Gaudeamus igitur, a popular academic hymn, the cadets were greeted by Vice-Rector for Students, Study Programmes and Quality Management at the University of Zagreb, Professor Ivana Čuković-Bagić. Speaking on behalf of Professor Damir Boras, Rector of the University of Zagreb, Prof. Čuković-Bagić pointed that the university study programmes the cadets had opted for were attractive, excellent and taught by some of the most exceptional lecturers and highly educated military experts. She expressed her belief that the co-operation between the Croatian Defence Academy and academia would continue, telling the cadets that they should be led by the power of their heart and mind whilst retaining their loyalty to the homeland.

In the town that symbolizes the victory in Croatia’s Homeland War of Independence (1991 – 95), the Commandant of the Croatian Defence Academy congratulated the cadets for choosing the military calling and continuing their education in military study programmes Military Leadership and Management, Military Engineering, Military Naval Studies and Aeronautics – Military Pilot. “By taking oath today, you will begin your studies and enter the military system. As students, you will have to fulfil academic obligations, but as soldiers/cadets, you will also go through demanding military training and acquire contemporary military knowledge and skills. During your studies, you will be trained and prepared for the execution of the most demanding tasks that you could come across in your military career. You will be put in situations that will require a swift, timely and efficient response. Our objective is to develop modern, professional officers who can respond to all challenges of modern warfare, continuously acquire new knowledge and skills as well as master the most sophisticated technologies. I particularly emphasize that you ought to preserve the rich Croatian military tradition and the values of the Homeland War,” Maj. Gen. Pađen told the cadets, adding that becoming an officer of the Croatian Armed Forces was both a great honour and a great responsibility.

Maj. Gen. Pađen pointed out that the development of military study programmes in co-operation with the universities in Split and Zagreb would be continued. Further, he announced the launch of the postgraduate specialist study programme Homeland Security, in which new interdisciplinary knowledge and competencies necessary for the integration and further development of the Homeland Security System would be attained.

Maj. Gen. Pađen also noted that the Croatian Defence Academy was in the process of being transformed into the Defence and Security University – a central place for the acquisition of knowledge in the domain of defence and security. 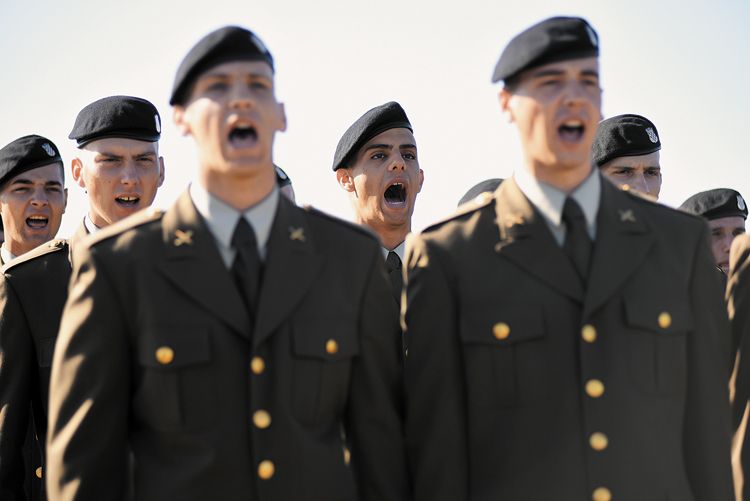 After these speeches, the commander of the Cadet Battalion invited the cadets to take a formal oath, which was enhanced by an overflight of several Pilatus PC-9M aircraft flown by cadet pilots under the supervision of their instructors.

The Minister of Defence Damir Krstičević forwarded congratulations from the Croatian prime minister and thanked cadets from partner states for putting their trust in the Croatian Defence Academy.

“Knin is a symbol of the victorious Croatian Armed Forces and victory in the Homeland War,” said Minister Krstičević while expressing his satisfaction at the fact that the oath-taking ceremony was once again taking place in Knin, following a nine-year hiatus. He also reminded that cadets’ graduation ceremony would be held in the eastern Croatian city of Vukovar, a symbol of suffering in the Homeland War. Both Knin and Vukovar (popularly dubbed Hero City) have symbolic value as locations where the modern Croatian Armed Forces were developed.

Minister Krstičević expressed his faith in the cadets and invited them to be proud of their decision to enter the system that had an individual at its core. “The Ministry of Defence and the Croatian Armed Forces owe all of their victories and conquests to the patriotism, volition, knowledge and experience of their staff. Aside from all human qualities at the core of a Croatian soldier’s character, success is also greatly contingent on knowledge, which is the key to the continuous enhancement of the most valuable potentials of the Croatian Armed Forces’ branches,” stressed Minister Krstičević. 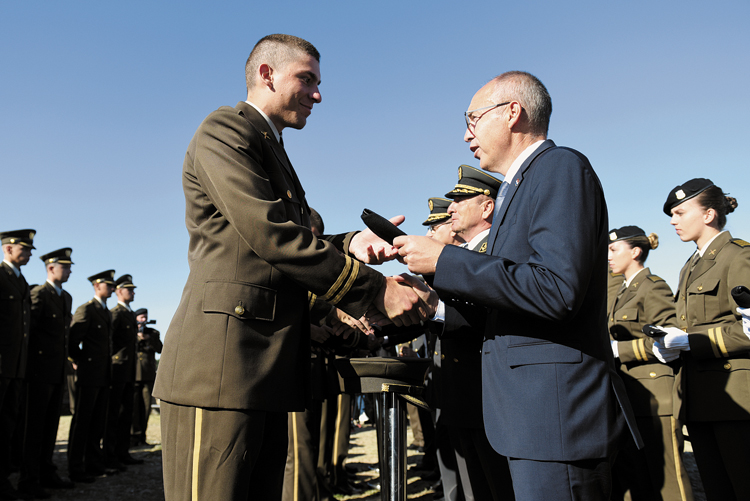 The minister of defence also announced the transformation of the Croatian Defence Academy into the Franjo Tuđman Defence and Security University – an enhancement to the Croatian Armed Forces’ capability of providing education – as well as the launch of the interdisciplinary study programme Homeland Security, which will combine education and research and enable the acquisition of new competencies currently lacking in the Homeland Security System.

The minister told the cadets that the Croatian Armed Forces had valued and continued to value every from of excellence. He called upon them to be exceptional, bold in the face of challenges and open to new ideas, emphasizing: “The only way to lead is by example. On your path of growth, improvement and development, you will come across hardships. Keep a positive attitude, think of famed warriors of the past, follow the vision that brought you here and you are sure to overcome those hardships.”

While congratulating the cadets on choosing the military calling, Zrinko Petener, acting as an envoy of the Croatian president, told them: “You have joined a victorious army and are now an unomittable link in the development of the Croatian Armed Forces. Strive for excellence, do not make compromises and choose the path of honour and victory bequeathed to you by your predecessors.”

The chief of the general staff of the Croatian Armed Forces joined in on the congratulations, telling the cadets that their oath committed them to an honourable, noble and professional service to their homeland and its citizens. He also recalled the long-time co-operation between academia and the Franjo Tuđman Croatian Defence Academy, a patriotic institution that had once educated the heroes of the Homeland War and that continued to educate future officers of the Croatian Armed Forces in the present.

Gen. Šundov told the cadets that, as future leaders who had chosen the path of honour, integrity and service to the homeland, they ought to place emphasis on virtues such as prudence, gallantry, dedication, generosity, humility and faith.

After the presentation of berets, students of the university study programme Military Leadership and Management could not conceal their pride and satisfaction. 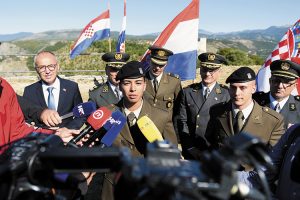 “I have felt that I belong in the military my whole life and I feel incredibly honoured to be here. To be presented a beret by the highest-ranking officials of the Croatian Government and the Croatian Armed Forces on Knin Fortress, a symbol of victory in the Homeland War, is a once-in-a-lifetime opportunity. I will strive to carry out each assignment as honourably as I can. My whole life, I have perceived the army as a big, special family in which unity and support for one another reign supreme.” 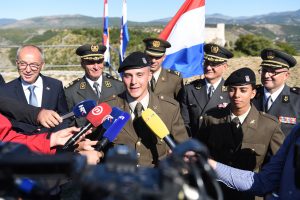 “Why did I decide to join the military? I was looking for an interesting, attractive and dynamic study programme and found it at the Croatian Defence Academy. Patriotism played a part in my decision, as well. My father is a disabled Homeland War veteran; he and his experience from the war guided me in my decision. I simply feel that every young person ought to somehow contribute to our homeland, for which our fathers fought and for which some Homeland War combatants sacrificed their lives, unfortunately. Knin is a symbol of Croatian freedom and victory in the Homeland War. There are no words to describe how it feels to be presented a beret by the minister of defence here.”