Back to homepage »
Share:
The reporters and cameramen of the “Hrvatski vojnik“ magazine visited the members of the 1st HRVCON  deployed to NATO's Enhanced Forward Presence within the German-led Battlegroup in Lithuania 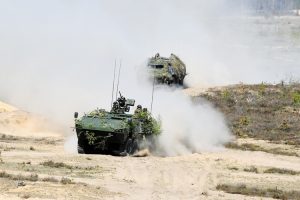 The reporters and cameramen of the “Hrvatski vojnik“ magazine visited the members of the 1st HRVCON  deployed to NATO’s Enhanced Forward Presence within the German-led Battlegroup in Lithuania.  The core of the Contingent is the 1ar Mechanised Company of the Battalion“Tigrovi“  of the Guards Motorised Brigade, which took part in the Exercise  “Spring Wolf“, which engaged the entire Croatian component of the Battlegroup with all available resources; the objective of the Exercise was integration training with the rest of the Battlegroup compoinents to test the achieved level of interoperability, trainedness and joint operation. The team crossed a 1,600-km long way to the Barracks “Rukla“ to visit and talk first-hand with the members of the Croatian Armed Forces  deployed in Lithuania and learn about their experiences with the military tasks far off their homes, side by side with the armed forces of NATO member  countries. The 1st HRVCON (mechanised company and Patria AMVs)  has been deployed to NATO’s Enhanced Forward Presence within NATO Battlegroup with Germany as a Lead Nation, along with Belgium, Norway, Luxembourg, France and the Netherlands. The Battlegroup  is a reinforcement of the  Brigade“Iron Wolf“ of the Lithuanian Armed Forces, The Croatian Contingent is composed of 187  members, with the 1st Mechanised Company of the Battalion “Tigrovi“ of the Guards Motorised Brigade of the Croatian Army. At our arrival the members of the HRVCON were preparing to leave towards the “Pabradė” Training Range – some 120 km off the barracks, to conduct an live-fire exercise with the members of the German and Dutch forces. The “Hrvatski vojnik“ team toured the  barracks  housing the Croatian and other seven nations of the Battlegroup (more than 1,200 soldiers),  which is  a training centre for the Lithuanian Armed Forces. 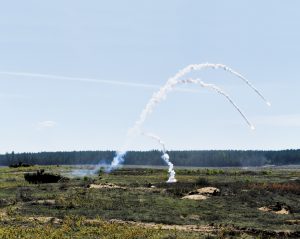 We were accompanied by 1st Lieutenant Mato Kuljanac,STRATCOM Officer, who explained each detail of the upcoming activity for the Croatian Contingent, and tells us of the daily routine and the tasks completed so far in the past six months spent in Lithuania. Our eyes caught  a large poster on the wall of the facility accomodating the Croatian contingent with the portrait of the legendary Commander of “Tigrovi“ Battalion – Lt. Col. Damir Tomljanović Gavran, with his biography in several languages and a picture of the  place where he lost his life – Tulove grede in Velebit Mountain in the background. The present-day battalion is a successor of the wartime “Tigrovi“ commanded by Lt.Col. Gavran and of its glorious tradition. St.Sgt Tomica Cesnik explained the presence of the posters ”We may be young soldiers but the fallen combatants are our role models and we continue the tradition of the wartime units and keep the memory of them and their heroic feats“. Another identical poster is on the wall in the “living room“ on the last floor, where the Croatian members also set up a small chapel, a wall with the children’s cards and memorabilia of “Tigrovi“ and an engraving “Faithful to our homeland“. The barracks provides a number of amenities for the soldiers’ free time – a gym open  24 hours a day, a volleyball or basketball ground. They are also offered the possibility to organise social and charity activities and sport competitions. 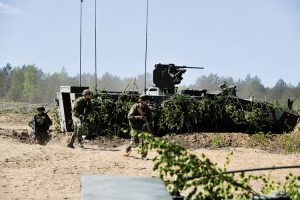 In the remote part of the barracks, some 15 Croatian Patria vehicles and the soldiers boarding them were waiting for the signal to move towards the Training Range “Pabradė” to take part in the Battlegroup’s days-long  integration training titled “Spring Wolf“, which was also observed  by the “Hrvatsli vojnik“ magazine team. The Range provides ideal conditions for various military activities. The sandy soil suggested a desert environment  despite the surrounding greenery. The constantly blowing wind was lifting the sand each time a vehicle passed and it got in our eyes and mouth. Howeverm, such conditions constitute an ideal setting for the manoeuvre capabilities for the assets available and the conduct of the assigned tasks. From our posts near the Patria vehicles we were waiting for the exercise with the Croatian forces assigned with a live-fire  tactical exercise of the  defending mechanised company, which was also observed by the Battlegroup Commander, Lieutenant Colonel Wolf Rudiger Otto (GER)  and the Commander of the Lithuanian National Defence Volunteer Forces Colonel Arturas Jasinskas. In the remote part of the barracks, 15 of the Croatian patriots on board the soldiers were waiting for the movement sign on the “Pabradė” field, where the members of the 1st Mechanized Battalion would fight the Tigers to participate in the multi-day integration training of the Fighting Group called Spring Wolf attended by our journalist- a cameraman team. The recreated tactical situation comprised an attack by the enemy mechanised battalion against the Mechanised Company’s positions; the participants used anti-armour guided rocket system (POVRS) 9K115 (METIS) anti-tank missile system, the  RPG-22 anti-armour rocket launcher and and 40-mm grenade launchers. The Croatian forces were reinforced by the members of the German Joint Fire Support Team equipped with Feneck vehicles who coordinated the firing with the 82-mm mortars followed by the POVRS 9K111 (FAGOT). The Croatian component was also reinforced by a Dutch engineer platoon, tasked with the preparation of combat positions. Seeing the Patrias enter the action and the Croatian soldiers precisely engaging all targets  and completing successfully this part of the Exercise was most impressive, but especially hearing the loud motto “ For Croatia like a Tiger“  across the Range once the Exercise was over and the soldioers received the commendation for their performance. 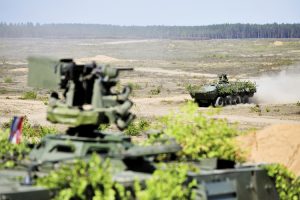 “The entire Croatian component of the Battlegroup took part in this activity, and the main objective of the Exercise was the integration training with other Battlegroup members to test the interoperability level“, said the 1st HRVCON Commander, Captain Marko Krpan, who underlined that there were no differences in operation compared to other nations, and also that the Croatian component was  presently the only one to have been evaluated “Combat Ready“  according to NATO/CREVAL  prior to the deployment to the mission. In the next period the Company will continue to train in planning and conduct of defence and of military operations in urban areas with the German and the Dutch units, which is expected to confirm the high level trainedness for joint operation by all Company’s components, and the capability of integrating the assigned forces. It will be followed by NATO international exercise “Saber Strike“ as the key event, which will conclude their seven-month rotation. Cpt  Krpan commends the performance  and the contribution  of all Contingent members “We have really worked as a team with a mission to present the Croatian Armed Forces the best we can and to accomplish all the tasks assigned. The recognition of their capabilities and professionalism is evident also from the statement by the Battlegroup Commander, Lieutenant Colonel  Wolf Rudiger Otto, who underlines the Croatian soldiers’ discipline, understanding and the attitude towards the duties.  Lt. Col. Otto also commended the Croatian Contingent members to be the fastest and best trained and said he was proud to command a Battlegroup comprising the Croatian soldiers. They have also distinguished themselves by their equipment, particularly the recognisable pattern on the uniforms. We witnessed to a new confirmation of the Croatian soldiers as the best  promotors of the country, and the impressions we left with made our travel back much more enjoyable. 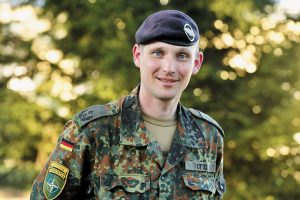 The Battlegroup currently comprises eight countries, and each of them is motivated to do its best and it is really a pleasure to work with all of them. The readiness of all units to contribute to the mission is the most important. Interoperability is a matter of attitude, and the Croatian Armed Forces  have provided an example. As other participating nations they make additional efforts and do their best. This is what NATO is about. Speaking of the Croatian component, I am honoured to command a Battlegroup that has Croatians in it. I have seen several training activities and I can say they are great.

The Battlegroup has trained a lot over the past three months, but the currently ongoing exercise “Spring Wolf“ is certainly the biggest activity taken so far here in Pabrade, in Lithuania, and it is really an opportunity to prove we are truly a Battlegroup.

How demanding is to command a multi-national unit, given the variety of the tactics, techniques and procedures applied by the eight nations within the Battlegroup?

As a commander of the Battlegroup I have had the opportunity to command various forces and get to know various nations and so with the Croatians, which have arrived today  different nations and with the Croatian forces that arrived today and will take the initial preparations in the next two days, and will “fight” against the German forces in a “Force to Force“ training; so I will see how they approach this task.

Each nation applies its own techniques, procedures and approaches, however, we have done a lot of training, as we are  doing now in “Pabradė” and I had a great opportunity to see how each of the nation works.  It is demanding to carry out the daily routine in a foreign language and to harmonise the various approaches to problem solving in the Battlegroup, but it is also rewarding  to see the the staff, units and the host country function  and make progress daily. We are really learning from each other. This is the largest activity at the tactical (battalion) level and I am sure that the armed forces of the participating nations will profit from it after the rotation  ends.

We have some new exercises. The said exercise will serve the Battlegroup to prepare for the final large exercise to take part in early June  – the “Thurnderstorm“ with the Lithuanian Armed Forces. There is still much work to do, but we  will be very proud of everything we have done before the rotation in July.

Do you have a message for the members of the Croatian Armed Forces?

As I said already, it is an honour to command the Croatian forces in the Battlegroup. I have seen some of their training activities and have seen their discipline, understanding and the approach to the duties. They are always the fastest, well-trained and it is a great pleasure to be in training with them.