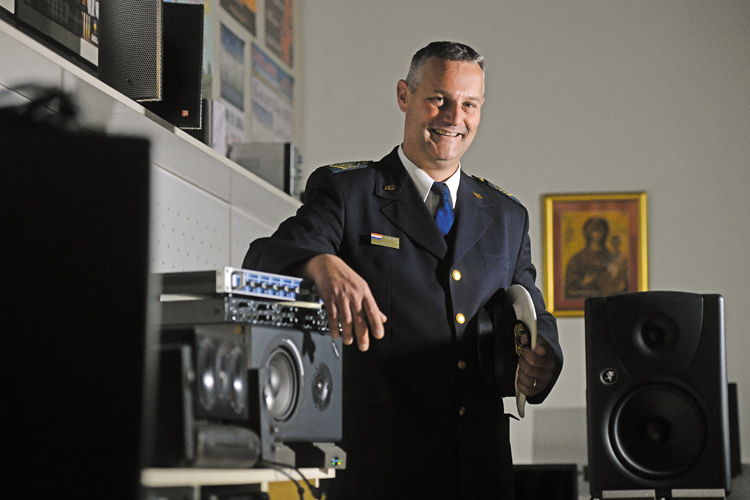 The Croatian Navy Vocal Ensemble (Klapa) “Sveti Juraj” has been active for 20 years, during which time they have gained recognisability both at home and abroad, as proved by their performances in China, in the EU Headquarters in Brussels and in the United States. As it is hard to enumerate all important events related to them, we have touched on some of them in an interview with the Ensemble founder and commander, 1st Sergeant Marko Bralić.

When I first met late Msgr. Josip Šantić, the first Vicar General of the Military Ordinariate in the Republic of Croatia, who visited the HRM Missile Base at Žrnovnica on 12 January 2001 and presented the idea of ​​establishing an ensemble to then commander, Lt. Col. Vinko Barbarić, I certainly did not foresee that Klapa “Sv. Juraj” would become a brand not only in the Croatian Armed Forces and of Croatia in general and beyond. The initial idea of ​​founding a klapa with the aim of representing the Croatian Armed Forces at the International Military Pilgrimage in Lourdes actually came from Msgr. Jean-Pierre Brard, Vicar General of the Military Ordinariate of the French Army. During his visit to Croatia he heard the klapa multipart singing and suggested Msgr. Šantić to present the Croatian Armed Forces at the opening ceremony of the military pilgrimage in the Basilica of Pius X, because it is original and recognisable only among Croats. The Klapa multipart singing actually originated from folk or Glagolitic chanting which were especially in use in Dalmatia, and lives on passed down from generation to generation from the time when only Croats of all Catholic nations (as the Bulwark of Christendom) had the permission from the Pope to recite masses in their native language.

In a film shot in Lourdes in 2016, titled called La chorale de Croatie, which was shot in Lourdes in 2016, Msgr. Brard himself explained it. The French people in Lourdes recognise us as “La choral de Croatie”, and are amazed by the sound as well as our mess white uniforms we wear as the sole Klapa in the world dressed in white. The Military Ordinariate recognised the importance and value of the Croatian Navy Ensemble “Sveti Juraj” right from the start as an original promotion of the Croatian Army at the International Military Pilgrimage in Lourdes, and I am grateful to all who have supported and believed in us.

We also owe appreciation to Msgr. Juraj Jezerinac, the former Military Ordinary and to late Msgr. Josip Šantić, and to the Department for Support to Military Ordinariate, headed by Major Petar Klarić, Vlado Krpan and others.

You have gained respectable status as musicians, and how you conciliate popular music with military discipline?

I have to admit that I heard many artists and singers ask me how we conciliated the military status and the art (singing), which stemmed from their conviction that they were contrary.  I have to express appreciation to all higher ranked levels for their understanding and support over our past 20 years, which made it possible for us to achieve the successes. There were suspecting voices, but our successes justified the establishment of an ensemble of the kind within the armed forces.

I would like to express appreciation to our present superiors – the Support Command, commanded by Lieutenant General Mladen Fuzul – for their strong support, as well as to the Commander of the Orchestra of the Croatian Armed Forces Lieutenant Colonel Miroslav Vukovojac Dugan. The army has clear rules for everyone, including musicians, which in our case means our priority tasks are related to protocol and ceremony tasks at the level of the General Staff, the Ministry of Defence and the President of the Republic, and other concert activities are allowed if they do not clash. We have not encountered any problems with that so far.

Over the past twenty years the Ensemble composition has changed. How do you spot the new talents willing to perform as artists and military personnel?

We were initially seven, and from 2002 to 2019 the Klapa’s composition remained unchanged. When our bass singer Ignacio Tranfić, a member from the very first day, for which he merits our gratitude, retired, we opened a public contest and held an audition, and decided to admit Stipe Botica (tenor) and Dragan Popović (bass) as our new members. I am glad that after long we have added new members to the Klapa, considering our constant and frequent performances. They are two great vocals – my left and my right wing as I call them – and we are moving on towards new successes on wings of song. 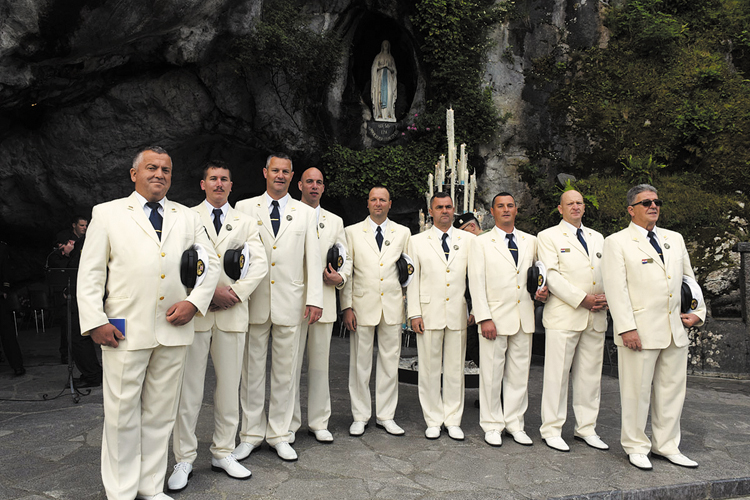 You gained success at home, which is a hardest thing – you won the famous Split Festival, alongside the renowned performers Goran Karan and Tedi Spalato.  With all due respect for the awards you have won, how does it feel to conquer the taste of the Split audience, a famous cradle of talented musicians and performers?

I think everyone will agree that no other town in Croatia teems with such outstanding singers, musicians, klapas and gifted individuals as Split and its surroundings from Trogir to Omiš, including the islands of the Split archipelago. It is a huge challenge for any singer to perform in Split, where there is the least chance to be stopped and asked for autograph or let alone for a selfie. The person who asks you to do that is certainly not from Split. The great Oliver Dragojević said that the only place to take a calm walk and coffee without being annoyed by fans was at the Split waterfront.

The audience in Split simply recognises quality and shows respect, but without humouring. It is the simply the character of the local audience. “No man is a prophet in his own land”, and it is virtually impossible in Split.

Today, there is almost no major and significant event without you and you are often on the road. How do you shorten your time on these trips and stay in shape to perform?

We have performed many times at the events of national significance – numerous anniversaries and commemorations of the events from the Homeland War, humanitarian concerts and festivals across Croatia. I wish to highlight the musical cohesion achieved over the past five years with the Croatian Navy Orchestra commanded by Major Milan Milas and the conductor Tonći Ćićerić. The Klapa and the Orchestra are one heart and one soul, two ensembles with a common musical opus that has been recognised as brand wherever we perform. Giving this many concerts and performances it goes without saying that we are well prepared through regular music rehearsals, which we have in our van on our way to the stages. If somehow we have some free time to ourselves, we spend it in good mood, listening to the studio or live recordings, and we often criticise ourselves, because we think we can always do better.

The year 2021 is our jubilary year; we are planning concerts across Croatia to mark the 20th anniversary of the Croatian Navy Vocal Ensemble and 30th anniversary of the Croatian Navy Orchestra, when the situation allows it. The first ceremonial concert was planned for early February in the “Vatroslav Lisinski” Concert Hall, with the Croatian League for the Fight Against Cancer. We also planned concerts of the Croatian Navy Vocal Ensemble and of the Orchestra at Peristil in Split as the first evening of the traditional Split Festival, a special evening of the Dalmatian Song Festival in Kaštela and of course a concert in the Vatroslav Lisinski” Hall in Zagreb in autumn and many others. I am happy that we managed to launch a new album, supported by our record company “Scardona”, marking our 20th anniversary, whose title is “Navigare necesse est”, compiling our greatest hits over the past five years. I warmly recommend it. We have been invited to perform for Croats living in Australia, Chile and other parts of the world, and although it is still hypothetical, we do wish to perform wherever and whenever possible.

Special thanks go to all members of the Klapa, present and past, for the 20 successful years of common successes and ventures. We are truly a team, which is the only way to get through. It is not always easy to lead of such a group while constantly striving towards ever better accomplishments. I I have led by my own example and be the first among equals

Special thanks to our artistic director Mario Božić, who is in charge of preparing the Klapa and prepares new vocal and instrumental arrangements of the Klapa for CDs and our tours.  We also appreciate maestro Tonći Ćićerić, the conductor of the Croatian Navy Orchestra, who is author of numerous songs and arrangements and with whom we have had an excellent cooperation, especially over the past five years. We wish to extend special appreciation to the Ministry of Defence and the General Staff of the Croatian Armed Forces as well as the Military Ordinariate for supporting our work and artistic performance all these years, and also special appreciation to the Croatian Military Publications, who have covered our work and successes from the very first day.