Back to homepage »
Share:
The Military Police Regiment and the Ministry of the Interior of the Republic of Croatia conducted a joint training with their working dogs at Barracks “Lieutenant Colonel Milivoj Halar” from 15th to 19th April. The dogs were trained in detecting explosive ordnance in three areas: in an open space, in a closed space and on motor vehicles. The training is a part of the preparations for Croatia’s upcoming presidency of the Council of the European Union in 2020 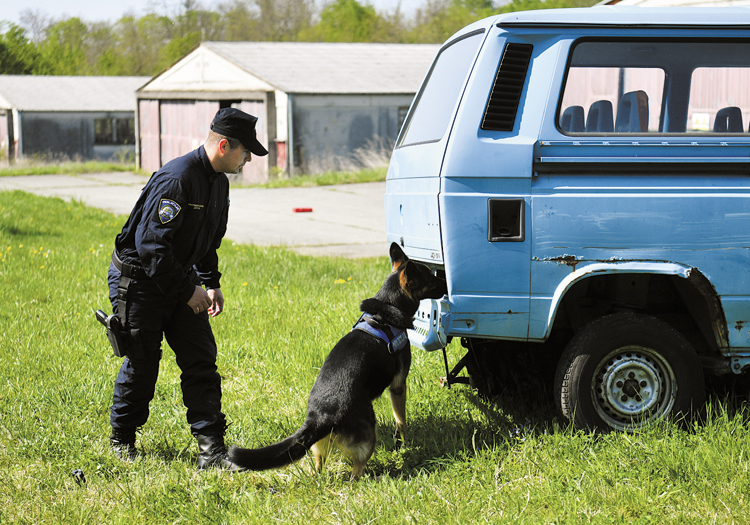 Whenever a place or a facility needs to be inspected and secured ahead of a VIP’s visit, the most important role is played by a co-ordinated team made up of a working dog and its handler. However, so that a working dog could attain the high level of capabilities needed for the execution of its tasks, it has to go through high-level obedience training and work well with its human partner. Working dogs can be trained to detect explosives, drugs or weapons. CROMIL’s team visited the joint training of the Military Police Regiment and the Ministry of the Interior’s working dogs at Barracks “Lieutenant Colonel Milivoj Halar” in Dugo Selo from 15th to 19th April. So as to prepare for and adapt their work to contemporary threats (the biggest one being terrorism) as much as possible, the Military Police Regiment’s Anti-Sabotage and Radiography Section organized a comprehensive training in detecting explosive ordnance for working dogs and their handlers. The participants of the training included the Ministry of the Interior’s Special Security Affairs Directorate, the Zagreb County Police Administration’s Counter-IED Service, the Honour Guard Battalion, the handlers of detection dogs from the 1st, 2nd and 3rd Company of the Military Police Regiment, the Anti-Sabotage and Radiography Section as well as experienced instructors from the Training Centre for Handlers and Military Working Dogs “Captain Krešimir Ivošević”, who also granted the use of their ranges for the training. The main difference between this particular training and all others lay in the amount of explosive ordnance that military working dogs had to detect. 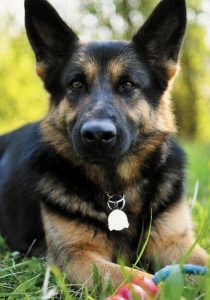 “The dogs and their handlers were trained in detecting explosive ordnance in three areas: in an open space, in a closed space and on motor vehicles. This was also an opportunity to test military and police working dogs’ reaction to as much as 20 kilo of explosive ordnance, which is a realistic amount that might be found by handlers on the job,” explained Command Sergeant Major Zoran Šušković, the Leader of the Military Police Regiment’s Anti-Sabotage and Radiography Section.

From what experienced guides told us and from what we witnessed at the training, the working dogs effortlessly managed to execute every given task and flawlessly detected places where a large amount of explosive ordnance was hidden, regardless of whether it was a car, a locked-up building or a trunk out in the open. Using their impeccable scent, they detected explosives and sat or lay next to it.

“In the training, we used common types of explosive ordnance found in this part of Southeast Europe as well as explosives that handlers might come across in peace-keeping operations. Our dogs are trained to react to both very small and very large amounts of explosive ordnance in spite of of various disruptors they might find while at work,” emphasized Sergeant First Class Romano Grdić, one of the most experienced handlers in the Anti-Sabotage and Radiography Section. The seven-month long basic course for military working dog handlers is conducted at the Training Centre for Handlers and Military Working Dogs “Captain Krešimir Ivošević”. Mostly German shepherds and Belgian Malinois are trained in that demanding, strenuous process.

Although every military working dog is ready to carry out its main tasks upon the completion of the basic course, both on domestic terrain and abroad, trainings such as the one our team visited are needed so as to prepare dogs for new challenges as much as possible. Seeing as how Croatian policemen conduct similar tasks and use the same tactics, techniques and procedures as the Croatian Armed Forces, joint training proved to be an important factor in strengthening national security. 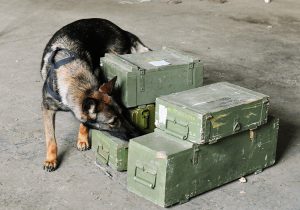 “A big advantage of this type of joint training is that Croatian soldiers and police officers can exchange their invaluable experience acquired while carrying out tasks in the domain of counter-IED protection. During the training, no significant differences in the tactics, techniques and procedures used by the Croatian soldiers on the one hand and the Croatian policemen on the other were observed, which is a good reference point for future trainings. I wish to point out that this is the first time that training of this kind was conducted with so many participants from the Croatian Armed Forces and other branches conducting counter-IED tasks,” said Command Sergeant Major Šušković, adding that the course was deemed dynamic and interesting by all participants, who were highly motivated to work and acquire new knowledge and experiences. Command Sergeant Major Šušković concluded that the training helped participants prepare for Croatia’s upcoming presidency of the Council of the European Union in 2020, when the Military Police Regiment and the Ministry of the Interior would take up the challenge of jointly protecting VIPs and facilities.

This fact was also emphasized by Miroslav Pejkić, the Head of Anti-Sabotage Protection at the Ministry of the Interior’s Special Security Affairs Directorate. Pejkić supervises the handlers of working detection dogs who inspect facilities so as to ensure the safety of said facilities and VIPs in them. The General Police Directorate has signed an agreement on co-operation with the General Staff of the Croatian Armed Forces so as to increase the efficacy of police working dogs during inspections of indoor and outdoor areas as well as vehicles.

“The collaboration has seen a boost lately because of Croatia’s upcoming presidency of the Council of Europe, when we will be engaged in many activities. Before that time comes, we want the handlers of working dogs to attain a high level of proficiency in detecting explosive ordnance and maintain it. This is not the first joint training of the Military Police Regiment and the Croatian police. We started collaborating last year, focusing on detecting large amount of explosive ordnance, since detection dogs normally come across small amounts. It was necessary for the dogs to familiarize themselves with the intense smell of a large amount of explosive ordnance. If the dogs did not train, they would have problems detecting explosives, which could lead to unpredictable problems. However, we are pleased to note that working dogs’ operational efficiency in detecting large amounts of explosive ordnance is on a high level,” Pejkić underlined.