Back to homepage »
Share:
Members of the Engineer Regiment and CIMIC Platoon of the Guards Mechanised Brigade displayed the integrated skills and capabilities for NATO Readiness Initiative within the Exercise “Spremnost 20“ (“Readiness“) in the  Training Range near Karlovac, and the Water Supply Platoon of the Support Command also underwent evaluation 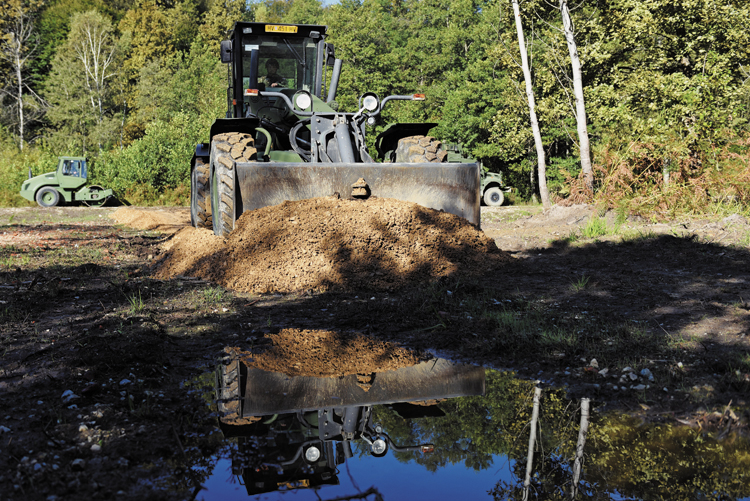 A part of the Exercise “Spremnost 20“, which was held at the Training Range of the 33rd  Engineer Brigade” at Cerovac near Karlovac from 28 September to 1 October 2020, featured the evaluation of the Engineer Combat Support Company of the Engineer  Regiment for the NATO Readiness Initiative (NRI), assisted by non-engineer units – the CIMIC Platoon of the Guards Mechanised Brigade and the Water Supply Platoon of the Support Command, all of whom displayed knowledge, capabilities and readiness for NRI in front of strict evaluators of the Croatian Army. Through the courtesy of the host unit – the Engineer Regiment of the Croatian Army – the “Hrvatski vojnik“ magazine team visited the participants at various locations across the training range on  30 September – the most intense day of the Exercise, courtesy of the Engineer Regiment of the Croatian Army. The team observed various components at work, and various “incidents” and other events featured in the scenario, which presented us an overall picture of the activities within the Exercise.

NATO vehicle encounters a minefield, and one soldier is injured. The members of Pioneer Platoon arrive within minutes. The area was secured by soldiers who were supported with a MRAP. The injured soldier has been provided assistance and handed over to the medical team as the EOD specialists defused the mines and enabled safe crossing of the minefield

The Engineer Platoon is repairing a macadam road built in a scrubland-covered area. Everything seems calm, the working machines and the operators attending on to their tasks.  All of a sudden shots are heard coming from the ambush. The members of the securing platoon came to their aid. Well hidden in the bushes they returned fire. The scenario featured a wounded soldier, but it all ended right.

Quite logically, the Support Command’s Water Supply Platoon is located near the water; the Training Range is rich in brooks and lakes, next to one we found a team commanded by 2nd Lieutenant Doris Kraljik. “Our impressions have been good so far, we are fulfilling the orders we have received and preparing for future tasks; we have trained together for a year and are working as a team; we are waiting for the confirmation and positive evaluation. First and foremost we are soldiers and need to be ready to employ our soldier skills“, said 2nd Lt. d that we must be ready to use military skills”, said 2nd Lt. Kraljik.

The engineers are assigned a new task, this time it is the Bridge Platoon.

One of the bridges has been damaged and the crossing has been disabled for the soldiers and assets alike. Suddenly the thudding of the vehicle-launched bridge on the chassis of T-55 tank is heard. The bridge unfolds within minutes to span to 18 m and provides solid and safe crossing.

The mission accomplished the recovery tank pulls out the “broken” bridge layer tank.

The CIMIC (Civil – military co-operation) is necessary in any international military operations. The CIMIC mission is to establish formal relations between the military command and the national and local authorities, the civilian population, international organisations and non-governmental organisations within its Area of Responsibility. The members of the CIMIC Platoon of the Guards Mechanised Brigade, normally belongs to the Brigade’s Command Company,  were amidst a briefing for the next mission, whose location was presented on an improvised maquette made of plants, stones, soil and other materials.

As explained by 2nd Lt. Adela Pišonić, a leader of one of the two CIMIC teams, the CIMIC teams were engaged with the negotiations between the two sides, one team as mediator and the other securing the location.

Most units which took part in the Exercise were based in a camp named Cerovo. The camp consists of wooden cabins in the wood by the road, which served as an accommodation and working facility.  The in-field part of the Exercise was preceded by the In-barracks phase, where the evaluators checked the plans and operations documents, the personnel status and the material and technical resources.

Captain Tomislav Baša, Commander of the Engineer Combat Support Company is well familiar with the exercises of the kind, serving in a Croatian contingent to the UNIFIL mission in Lebanon. He summed up the activities conducted in the training range: “Training a company with three various specialties is very demanding because it calls for quick reactions and involves various techniques.

However, I am very pleased because we are successfully applying all our lessons learned from various training activities and courses. Most members of the Company are very young but motivated and experienced, which instils a winning mentality”, said Cpt. Baša.