Back to homepage »
Share:
Varaždin hosted the ceremony marking the 27th anniversary of the establishment of the 7th Guards Brigade “Puma“ – the unit that crowned its glorious war history in the Knin Fortress 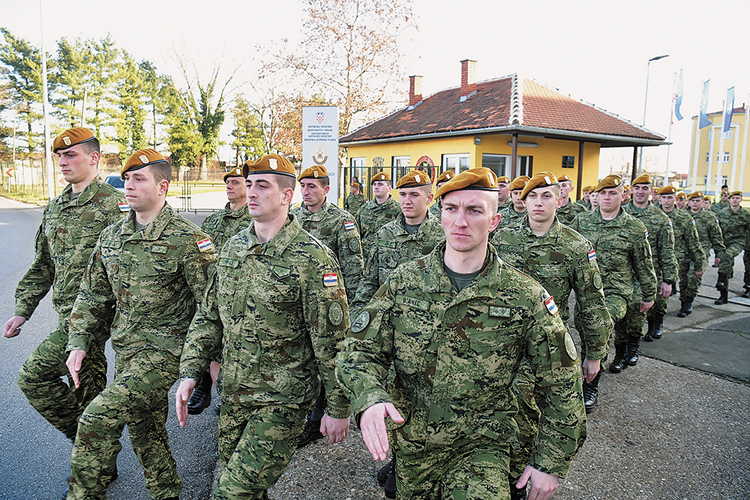 The members of the “Puma“ Battalion headed from the barracks “7. Gardijska Brigada Puma” towards the Kapucinski trg in Varaždin, where the main ceremony was held.

Respects for the fallen members in the Chapel in the Barracks “7. Gardijska brigada Puma“, by the Prime Minister of the Republic of Croatia Andrej Plenković, by the Envoy of the President of the Republic of Croatia Ante Deur, the Envoy of the Speaker of the Parliament Andjelko Stričak, by the Minister of Veterans of the Homeland War Tomo Medved, the Minister of Economy, Entrepreneurship and Crafts Darko Horvat and by the State Secretary for Defence Zdravko Jakop.

Prime Minister Plenković reminded that the 7th Guards Brigade was the first to enter Knin, which was a huge moment for freedom and history of the Croatian people, and stressed that during the office of his Government the Croatian Armed Forces returned to Varaždin.

“The Croatian Armed Forces are evidently close with the people here in northwest Croatia, and I am certain that it will motivate the young to join them”, said the Prime Minister.

The ceremony featured a formal line-up of the members of the 2nd Battalion Pume, the successor of the 7th Guards Brigade of Varaždin, and the presentation of commendations and awards to the meriting members.

The State Secretary for Defence Zdravko Jakop stated that Croatia had been proud of “Pume“ victories in the Homeland War crowned at the Knin Fortress, the emblematic site of the victories of the Croatian Army, and recalled the return of “Pume“ from Našice to Varaždin after 10 years and the symbolic 184-km march in harsh weather conditions in December 2018.

Congratulating the members of the Battalion the Envoy of the Chief of the General Staff of the Croatian Armed Forces Major General Boris Šerić emphasised that the war history of the legendary Puma Brigade was epitome of honour, courage, sacrifice and glory.
“Today, the Puma Battalion is equipped with modern equipment and weapons and has reached a respectable level of trainedness and operational readiness, and is a backbone of the Guards Armoured Mechanised Brigade and of the Croatian Army” said Maj. Gen. Šerić and commended the professionalism, readiness and trainedness of the Battalion, proved through successful engagement in international missions and operations, as well as in national and international military exercises.

The Commander of the Pume Battalion Pume Major Stjepan Jalžabetić recalled the days of the establishing of the 7th Guards Brigade, whose members valorously defended Croatia step by step igade, and stressed that the Battalion needed to prove to be a worthy successor of the values and principles passed down by glorious “Puma“ Guards Brigade.

The mission of “Pume“ is to serve the people and assist them if necessary. It is a precondition for the future and prosperity of this part and of Croatia as a whole. The Government of the Republic of Croatia and the Ministry of Defence will continue to promote the values of the Homeland War. It is our duty and our lasting pledge, for our past and future alike”, said Secretary of State.

Congratulating all members on their day, the envoy of the Chief of the General Staff, Major General Boris Seric, emphasized that the war path of the legendary Puma is a path of honor, courage, renunciation, sacrifice and glory.

“Today, the Puma Battalion is equipped with modern equipment and armaments and has reached an enviable level of training and operational readiness, thus forming the backbone of the GOMBR and the Croatian Army,” said General Seric, adding that the members proved their professionalism, readiness and training successful participating in international missions and operations, as well as in domestic and international military exercises.