Back to homepage »
Share:
“This is not a day of anxiety but a day of pride, strong emotions and vitality, because there is no nobler trait and value than giving life for freedom and human dignity” 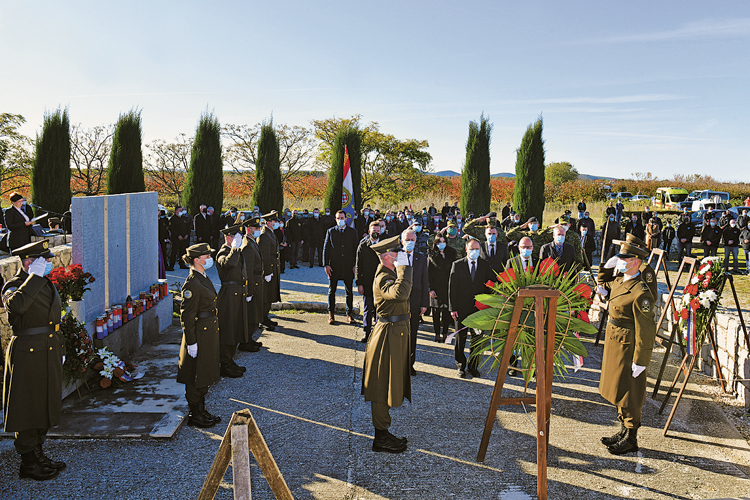 The respects to the victims of Škabrnja were paid by a symbolic memorial column and wreath laying at the local memorial monument and cemetery on 18 November 2020.

The state delegations and the families of the victims, the representatives of associations, units, cities and counties visited the local cemetery of St. Luka and laid wreaths at the Central Cross in memory of the tragic event and of all victims of Škabrnja, and at the associations of civilian victims of the war laid wreaths at the memorial monument at the mass grave.

“This is not a day of anxiety but a day of pride, deep emotions and vitality, because there is no nobler   trait and value than giving life for freedom and human dignity. Croatian freedom and victory were born from the sacrifice and blood of our defenders”. The Mayor also underlined that as of 2020 the Vukovar and Škabrnja Remembrance Day were national memorial days, commemorating the victims of the two heroic places.

Then, with dignity and deep respect for the victims, on 18 November 1991, the Column of Remembrance marched down the street to the local church.

In the Church of the Assumption of the Blessed Virgin Mary, a Mass was served for all the fallen in the Homeland War, led by Msgr. In his sermon the Archbishop of Zadar Msgr.  Želimir Puljić reminded of the pain suffered by the inhabitants and defenders of Škabrnja, commemorated on 18 November with piety and gratitude. Msgr. Puljić underlined the importance of admitting the guilt and of repentance for the committed crimes but also of the power of forgiveness as the only possibility to discard the past and look turn to the future.  Msgr. Puljić reminded of the words of Cardinal Franjo Kuharić that the respect for one’s neighbour was a human virtue and that nobody was allowed to administer justice for himself and appealed to the courage to forgive and to promote the spirit of love and tolerance and to reject any radicalism.

During the defence of Škabrnja 36 Croatian defenders – the members of the Self-Standing Battalion of Škabrnja and from the neighbouring municipalities and 56 civilians were killed, while six more people died from the EXO explosion.